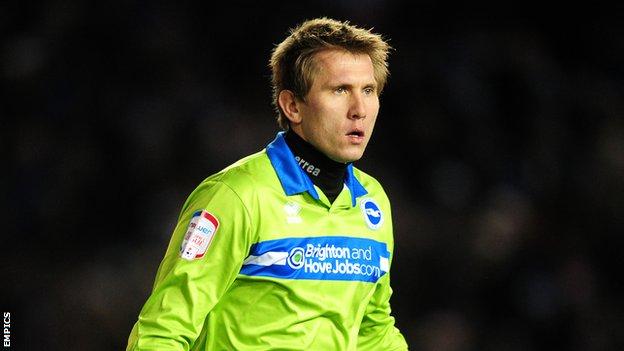 Brighton goalkeeper Tomasz Kuszczak says the side must maintain their focus to make the Championship play-offs.

The Seagulls are sixth, two points ahead of Leicester and Bolton, after Saturday's 1-1 draw with the Foxes.

He told BBC Sussex: "We have got some experience in the team and have a solid unit defensively.

"We have got into a good position but it is really tight. We cannot afford to make mistakes now. I think it will be like that to the last game."

The Seagulls have drawn 17 league games this season, which is the most in the Championship.

Only York, with 19 draws in League Two, have recorded more draws in the whole of the Football League.

The 31-year-old Poland international added: "I'd love to go back to the Premier League with Brighton.

"There is obviously still a lot of work to do but if we manage to stay in the play-off positions then we will have a big chance to go up.

"We have a good record against the teams that are competing with us now for a play-off position but we have to keep going."

Albion would have slipped out of the top six had they lost to Leicester at the Amex Stadium at the weekend but Kazenga LuaLua's equaliser rescued a point.

"I think it is the right result for both teams," Kuszczak said.

"We were desperate to win but we were playing against a really good team.

"In these kind of games you have to be happy with a draw, because we had chances and so did they.

"We didn't start well and maybe we weren't sharp enough."

Brighton have drawn their last three games to take their total number of stalemates to 17 this season, the second most in the entire Football League.

The Seagulls have lost the same number of games as top-of-the-table Cardiff and the former West Brom and Manchester United stopper hopes they do come to regret rue their failure to convert draws into wins.

"We have not lost that many games this season or let in that many goals," he said.

"The problem is the amount of draws we have got. Hopefully it will not cost us a play-off position.

"We have got difficult games coming up now and we have to recharge our batteries and be ready for Middlesbrough away. It may be a vital game for us."