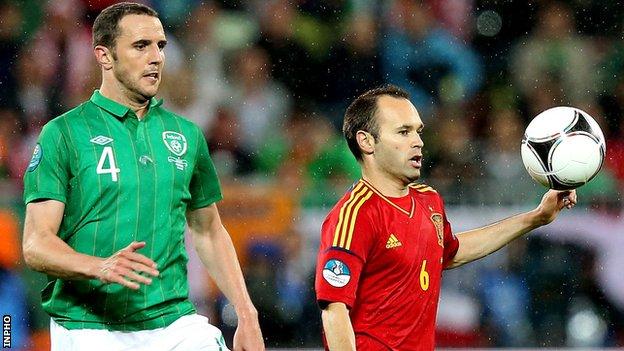 The Republic of Ireland will face World and European champions Spain in a friendly in New York's Yankee Stadium on 11 June.

The match will come four days after the Republic's World Cup qualifier against the Faroe Island in Dublin.

It will conclude a busy period of games for the Irish with them facing England at Wembley on 29 May before a 2 June friendly against Georgia in Dublin.

Spain hammered the Republic 4-0 on the way to winning Euro 2012 last summer.

Republic of Ireland boss Giovanni Trapattoni said he was "looking forward" to the New York game.

"Our team is in evolving and showing a lot of promise," added the Italian.

"The recent games demonstrated that our players have serious potential.

"Matches against opposition like England, Georgia and Spain are very helpful to that development and great preparation for our important competitive fixtures in June, September and October."

It has been confirmed, meanwhile, that the Republic's World Cup qualifier against Austria on 10 September will be played in Vienna.