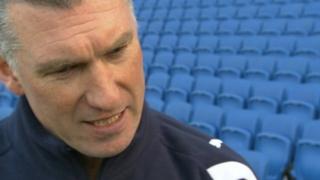 We must hold our nerve - Foxes boss

Leicester City boss Nigel Pearson has a simple message for his team as they enter the home straight in the Championship promotion race: "We must hold our nerve."

Pearson has presided over a run of just one win in 12 games, a sequence that has seen them slip from second to seventh.

BBC Late Kick Off Midlands joined Leicester at Brighton on Saturday, and Natalie Jackson's report will be on at 2320 BST on BBC1 on Monday.