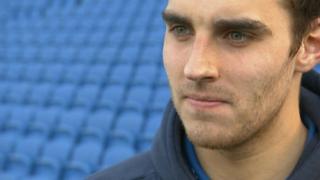 Leicester midfielder Matty James believes his goal at Brighton on Saturday could provide the promotion boost that the Foxes desperately need.

The former Manchester United youngster, who moved to Leicester 11 months ago, has found himself part of a squad that has managed just one win in 12 to fall out of the Championship play-off zone.

After Saturday's draw, three of Leicester's remaining games are against sides currently in the play-off zone - Watford, Crystal Palace and Nottingham Forest.

James was talking to Natalie Jackson ahead of tonight's BBC Late Kick Off Midlands at 2320 on BBC1.