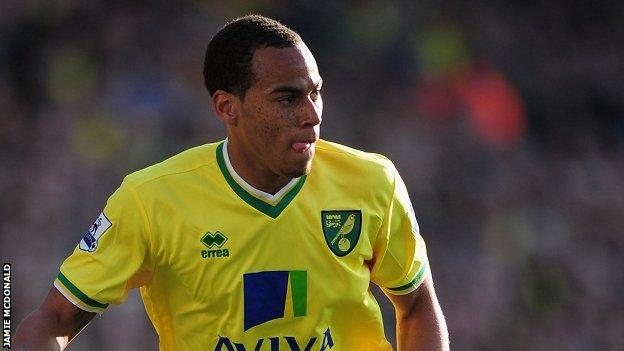 Elliott Bennett believes Norwich were rewarded for hard work on the training field during the 2-2 draw with Swansea.

The result left the Canaries five points above the relegation zone with six games to play.

Bennett told BBC Radio Norfolk: "We had a lot of possession in Wigan's final third in our previous game and didn't make enough of it.

"We trained really hard all week to put things right and against Swansea we were able to take some chances."

Bennett, who set up both the Canaries' goals against the Swans, said that after being out-played in the opening quarter, the Norwich players finished the game feeling they could have eased any relegation concerns by taking all three points.

"If you'd offered us a point in the first 25 minutes we'd have taken it because we didn't start very well," he admitted.

"But we ended on top so we came in feeling it was two points dropped. But it's a positive when you don't lose, and we just need to keep picking up points until the end of the season.

"I honestly don't know why we started slowly, sometimes you come out of the blocks with all guns blazing and sometimes you don't. It shows the spirit in the team that we didn't just crumble.

"When you lose like we did at Wigan the previous week you can't wait to get back out there, but with the Premier League it's usually just games at the weekend, when sometimes you wish you were playing on the Tuesday. But we trained really hard all week to put things right.

"Scoring is the hardest thing to do in football, but against Swansea we created chances and managed to take two. Hopefully at Arsenal next Saturday we can dig in, show some spirit and hopefully take some points from there too.

"We may be five points clear, but some of the teams below us have games in hand. At this stage of the season you'd prefer to have the points on the board, but we can't rely on other teams to lose, we have to concentrate on picking up as many points as we possibly can so our fate stays in our hands."