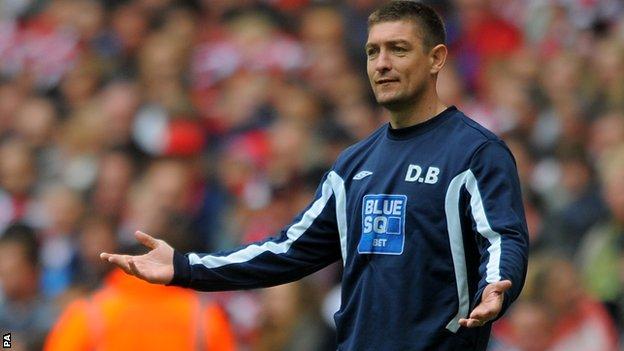 Barrow boss Dave Bayliss says he feels the penalty incidents in Saturday's 4-0 defeat by Mansfield sums up the season.

With the match scoreless, Richie Baker missed a spot-kick for the home side before Matt Green later won and scored a penalty for the visitors.

"To be honest, when the referee blew I thought their lad was getting booked for diving," Bayliss told BBC Cumbria.

I don't know what I did in a former life as, both penalties aside, we've now hit the woodwork seven times in seven games - it's ridiculous

"We miss one to go ahead then he dives, scores the penalty and it's a huge task at 2-0 - it just sums up the season."

Conversely, Barrow are mired in a relegation scrap, 22nd in the table and three points behind fifth-from-bottom Stockport with only three games remaining.

"People say that when you're at the bottom you don't get the decisions and it's true, that one is really hard to take," he continued.

"Our lads took it personally and then lost their discipline for a short while after that too.

"It was a bad decision but the other goals were avoidable as we've just given the ball away cheaply. So in some ways, we've no one to blame but ourselves when you do that and you miss a penalty.

"Still, I don't know what I did in a former life as both penalties aside, we've now hit the woodwork seven times in seven games - it's ridiculous."