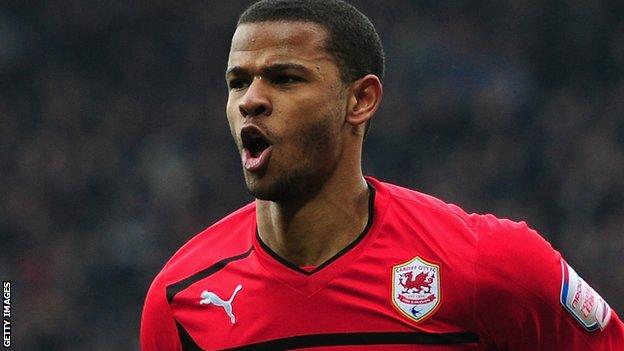 Campbell, 25, sat out the 0-0 draw at Watford because of the injury he suffered in the win over Blackburn.

The Championship leaders are hopeful the England international will be fit for Saturday's home match with Nottingham Forest.

"He took a heavy knock against Blackburn so he's recovering from that at the moment," Mackay said.

"We'll look at that and monitor that day to day and how he's recovering."

Campbell has made a big impact since joining Cardiff from Sunderland on a three-and-a-half-year deal in January.

The former Manchester United player has scored six goals in 11 appearances for Cardiff, who are five points clear at the top of the Championship.

Mackay's side will secure promotion if they win on Tuesday and beat Forest on Saturday, providing Watford fail to beat Peterborough on the same day.

"We're sitting at the top of the league with six games to go so obviously there's a certain level of hope," Mackay said.

"That's something for our fans to grasp on to but for us it's just to make sure we actually go out there and play against the next team in front of us.

"We take every team as serious as the next in our league. It's the way we've gone the whole season whether you win, lose or draw. We have to be at our best to beat anyone."

But Mackay confirmed he is in talks with Norwich with a view to extending the 27-year-old's spell at Cardiff City Stadium.

"I keep in touch with Chris [Hughton, Norwich manager] weekly on it so that's something we'll discuss this week in the hope that we can keep him," Mackay added.