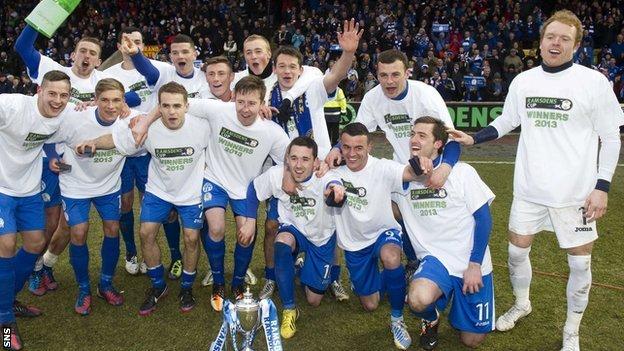 "Stand up, for the champions!".

It was a rousing chorus that was all the more remarkable because nothing much was happening on the pitch.

A few minutes left to play in normal time with the Ramsdens Cup Final locked in a goalless draw was not a lot to sing about.

But Queen of the South do not usually reach many such occasions and the fans were determined to enjoy this one.

Their opposite numbers in the Partick Thistle section of the stadium in Livingston were also in good voice for their equally rare cup final day out.

A league and cup double, just one league defeat to date and 100 goals scored so far - things have never been better for the south of Scotland side.

It made for a cracking atmosphere even if the football did not always scale the heights.

One of the biggest debates for the Dumfries support before the game was what time to leave and what route to take to get to the final.

But, whatever method used to get to the central belt location, it was more than worth the journey - just for the drama of extra time and penalties alone.

It looked for all the world as if Nicky Clark had sealed the win when he scored in extra time.

And when Lee Robinson saved a penalty late in the game and Aaron Muirhead saw red, we celebrated as if the job was done.

We should have known better of course, because, for all this team has swept all before them in the Second Division this term, Queens generally don't do easy victories.

They have rarely had one tougher than this.

Thistle grabbed an equaliser seconds before the end of extra time to send their delighted fans spilling onto the pitch, and it could have been a killer blow to the Doonhamers' morale.

Instead, pushing gamesmanship to the limit, Robinson was the hero once again, saving a couple of penalties in the shootout to clinch the cup.

As the fans in yellow and red filtered out of the ground, those in blue stood to salute their heroes.

But once the journey home was over, we started to debate what lies in store for this team.

Can we keep the squad together? What structure will Scottish football take next season? Will we ever see another campaign as good as this?

Followers of the Dumfries side know their players - and managers - will always be the target of transfer overtures from bigger teams.

But they showed on Sunday afternoon that they should be more than able to compete with sides in a higher division next year.

As for getting another season like this, it seems highly unlikely.

A league and cup double, just one league defeat to date and 100 goals scored so far - things have never been better for the south of Scotland side.

All they can do is sit back and savour their achievements for a little while before getting on with preparing to try to live up to their successes in the future.

Football waits for nobody but, in the meantime, Queen of the South fans deserve to bask in a little more glory.