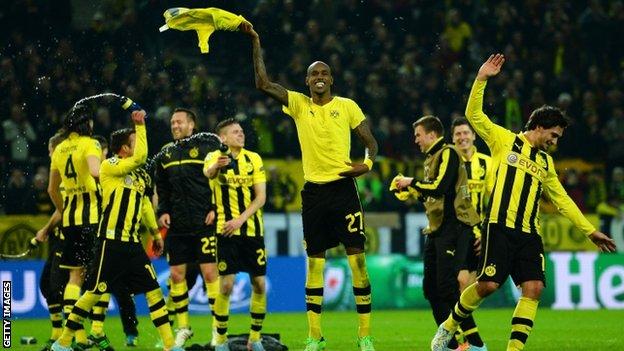 Borussia Dortmund scored twice in injury time to snatch a dramatic Champions League victory over Malaga and secure a place in the semi-finals.

Marco Reus and then Felipe Santana struck for the German side, although the winning goal - poked home from a matter of inches - looked offside.

After a goalless first leg in Spain, Joaquin scored from 20 yards for Malaga before Robert Lewandowski equalised.

Substitute Eliseu looked to have scored Malaga's winner before the late goals.

Dortmund boss Jurgen Klopp had talked before the match about his desire to see his team's "wonderful story" continue but it looked as though they would pay for wasting several good chances during the first leg.

Eliseu had finished from close range eight minutes from time - another goal allowed to stand despite a strong hint of offside - to leave Dortmund needing to score twice.

But the vociferous home crowd were sent into raptures as first Reus slotted home into an empty net from eight yards after the ball ran fortuitously into his path and then Santana pounced after a huge scramble inside the penalty box.

Several Dortmund players looked to be offside as the initial ball was played into the Malaga area and, seconds later, Santana was also in an offside position when he scored the winner, touching home a goal-bound effort from substitute Julian Schieber.

Dortmund's obvious joy was in stark contrast to the emotions of the defeated Malaga players, with a cruel end especially harsh on coach Manuel Pellegrini, who had only arrived in Dortmund on Tuesday after flying back from his native Chile, where he had attended the funeral of his father on Monday.

This was Malaga's first outing in the Champions League and there will be no possibility of a repeat next season as a series of off-the-field financial problems means they are banned from European competition for one campaign when they next qualify.

Dortmund remain the only undefeated team in the competition - but after a disjointed performance that required an ending reminiscent of Manchester United's victory over Bayern Munich in the 1999 Champions League final to seal their progress.

There was no hint of the drama to come during an uninspired and largely chanceless opening period that ended when Joaquin left Marcel Schmelzer reeling with a deft turn before drilling his low left-foot strike through the legs of Neven Subotic from 20 yards.

My assistants and me were looking at each other in shock in the dressing room and saying 'this is crazy'. This is the best I've ever felt

Dortmund equalised shortly before the break, punishing Malaga for squandering possession close to the halfway line, with a sublime touch from Reus sending Lewandowski free at the end of a brisk counter attack.

The Polish striker still had work to do but skipped past visiting goalkeeper Willy with a decisive first touch before placing the ball into an empty net.

It did not dent Malaga's endeavour and they twice went close through headers from Joaquin either side of the break.

The first lacked power and was easily stopped but the second drew an athletic, stunning left-handed save from home keeper Roman Weidenfeller.

Dortmund occasionally threatened - Lewandowski had a shot saved and Mario Gotze blazed rashly wide - but coach Klopp became increasingly animated on the sidelines and by the hour mark his side had started to look ragged and short of inspiration against disciplined opponents.

Weidenfeller saved a ferocious long-range strike from Jeremy Toulalan that would surely have killed the tie before Willy made two stunning saves to maintain his team's advantage.

First Reus seemed certain to score after connecting with a low cross from Lukasz Piszczek and then a low strike from Gotze appeared to be heading into the bottom corner, but both times Willy saved with his legs.

However, Willy was powerless to prevent the late goals that saw Dortmund eliminate his team.