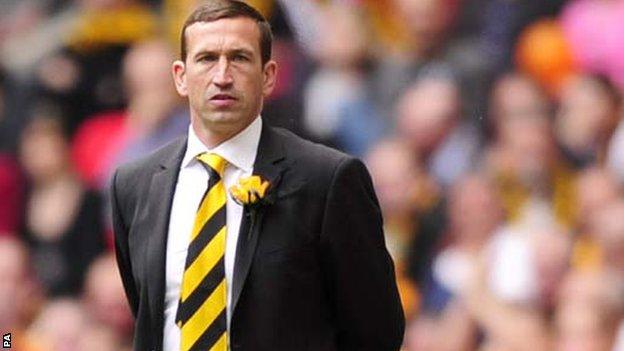 Edinburgh is under contract for another season at Newport, but the club are working on a new long-term deal for the former Tottenham Hotspur defender.

"The club would be silly to let him go. I'm not saying they are going to but I think he's really enjoying it down here," said 32-year-old Flynn.

"If he got us promoted it would be the icing on the cake for him."

Edinburgh has transformed the club from Blue Square Bet Premier strugglers to title contenders in his short time at the club.

Avoiding relegation was the sole objective when he in October 2011.

Newport finished the season just six points above the relegation zone, but County have been looking upwards rather than downwards ever since.

"I know he's brought in some good players but the main thing he's brought in is togetherness," added Flynn, who has played in the Football League for clubs including Wigan and Gillingham.

"I know teams go on about it, but we really have got an outstanding team spirit. It can take you a really long way.

"He's added some quality - he's been selective in the players he's brought in."

Although hopes of winning the title and with it the sole automatic promotion place from the Conference have realistically gone, Newport can guarantee a place in the play-offs by beating Braintree on Tuesday.

Flynn could return from a groin injury, while Danny Crow and Max Porter will face a late fitness test after missing last week's goalless draw at Cambridge United.