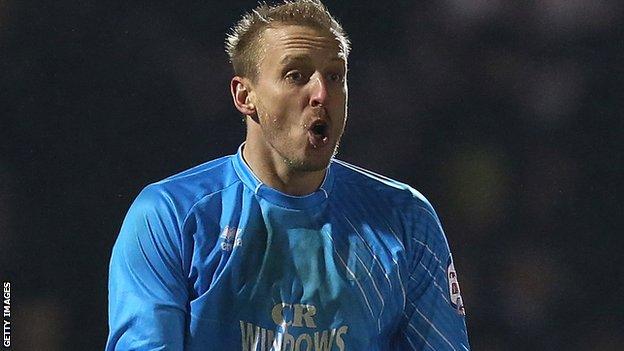 Millwall goalkeeper Steve Mildenhall has said he is interested in making a permanent move to Bristol Rovers after a successful loan spell.

The much-travelled 34-year-old arrived at the Memorial Stadium in January and has become first-choice keeper.

Mildenhall's deal with Championship Millwall ends in the summer and he confirmed to BBC Radio Bristol he had entered contract talks with Rovers.

"We're waiting to see what comes back," he confirmed.

"I've never been one to give definite answers because football changes from one day to the next.

"I'm a West Country boy and it's nice to be back here. I've really enjoyed my football and it's the first time I've enjoyed it in a while.

"The future seems bright for this club so it's very enticing."

Swindon-born Mildenhall started his career at his hometown club before spells with Notts County, Oldham, Grimsby, Yeovil and Southend.

He signed for Millwall in the summer of 2010 but has spent much of this season on loan, first at Scunthorpe before joining Rovers.

Mildenhall became one of the first signings for returning Pirates boss John Ward, who took over on 17 December.

Since then, Ward has led them out of the League Two relegation zone to within five points of the play-offs.

"It's funny that in three months we've gone from thinking about keeping the club in the division to having an outside chance of the play-offs," said Mildenhall.

"There's four games left and I think it's important to address them and be as positive as we can.

"How we finish the season can transpire in to next season. A strong, positive finish will bode well and be carried through in to pre-season."