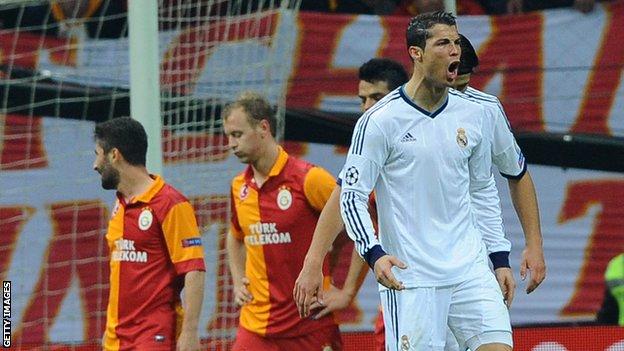 Real Madrid survived a second-half onslaught from Galatasaray in their Champions League quarter-final to reach the last four for a record 24th time.

The Spanish champions' comfortable 3-0 victory in the Bernabeu left Jose Mourinho's team within touching distance of the semi-finals and many expected the second leg to be a formality for the nine-time European champions.

For the opening hour it was exactly that, as Real played with a measure of confidence and assurance from the first whistle.

But Eboue's spectacular goal sparked a dramatic turnaround and set up a grandstand finish in Istanbul.

Mourinho, bidding to become the first man to win the Champions League with three different clubs, will be relieved that his team regained their composure in the final 10 minutes to put the tie to bed.

Ronaldo finally put the tie beyond the Turkish champions as he drilled past Fernando Muslera in injury time - almost 90 minutes after seemingly ending their hopes with the opener.

A vociferous home crowd, often described as providing one of the most intimidating atmospheres in European football, were intent on unsettling the visitors in the opening stages.

But Real quickly found their rhythm and already had Galatasaray on the back foot before Ronaldo swept in Sami Khedira's low right-wing cross.

If Galatasaray's task was not difficult enough already, the away goal left the hosts needing to score five goals to advance.

However Real continued to control possession and were only denied a second goal in the first half by Uruguay international Muslera.

Ronaldo was the architect of a flowing move, flicking into the path of Angel Di Maria whose fierce shot was instinctively pushed over the crossbar by Muslera.

Galatasaray barely threatened in the opening 45 minutes, with Sneijder forcing Real goalkeeper Diego Lopez into his first save with a low 20-yard shot shortly before the half-time break.

Real continued to stroke the ball around in the early stages of the second half as they looked to further subdue their already-deflated opponents.

But the momentum swiftly, and surprisingly, swung in the home team's favour after Eboue's equaliser.

The Portuguese forward is the leading scorer in this season's Champions League with 11 goals.

Sneijder's pullback from the left channel picked out the on-rushing Ivorian defender who emphatically smashed an unstoppable 20-yard strike past Diego Lopez.

Galatasaray started to play with the vigour and optimism which they lacked in the previous hour and Sneijder, with the goal at his mercy, somehow pushed a left-foot shot wide after Fabio Coentrao's misplaced pass.

But the Dutch international made amends as he coolly converted the second after he was picked out inside the Real area by substitute Nordin Amrabat.

The home crowd erupted as they sensed a remarkable upset, but in truth Galatasaray failed to capitalise as Mourinho brought on Raul Albiol for midfielder Mesut Ozil to stifle the hosts.

Arbeloa was booked for fouling Sneijder in the 89th minute before receiving another yellow card within seconds for dissent.

The ex-Liverpool defender will be suspended for Real's semi-final first leg and the Spaniards will find out their last-four opponents when the draw is made on Friday.