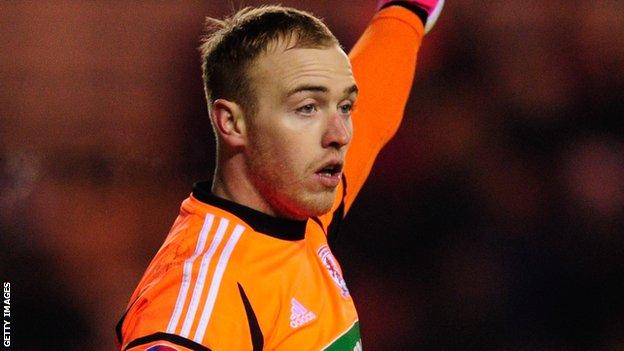 Middlesbrough boss Tony Mowbray has defended Jason Steele after his error in Saturday's defeat at Hull.

Boro lost the game 1-0 after the 23-year-old keeper failed to keep out Robbie Brady's weak free-kick.

"For Jason and us obviously the goal's a huge disappointment - he's got his head in his hands," he told BBC Tees.

"It's a mistake but I won't criticise him when he's been excellent all year. Our lack of goals is more worrying. That's the real problem, not Jason."

Middlesbrough have endured a terrible 2013 thus far, winning only twice in 16 league matches and tumbling from Championship promotion contenders to mid-table.

They have failed to score in four of their last five matches, with their only goals coming in the 3-2 defeat to Wolves in March.

Championship bottom six based on results in 2013

"I don't think anyone who watched at Hull could think we deserved to lose that match but it's been the same in a lot of games," Mowbray continued.

"Our problems lie in our inability to put the ball in the net and it's obvious for everyone to see. The goals have really dried up and it's very frustrating.

"We've tried every striking combination in the last few weeks and we'll keep searching for a way to score some goals and win some football games."

Having begun the year in third place, Boro now sit ninth and seven points from a play-off spot.

The club recently announced annual losses of £10m and, notwithstanding a remarkable set of results, next season will be their fifth consecutive Championship campaign since being relegated from the Premiership in 2009.

"The five games left are important to look at players that maybe haven't played much this year," Mowbray added.

"But there has to be a balance between giving people opportunities and having a responsibility to win football matches.

"It will be good to see what they can do and maybe a new formula will work for us as well."