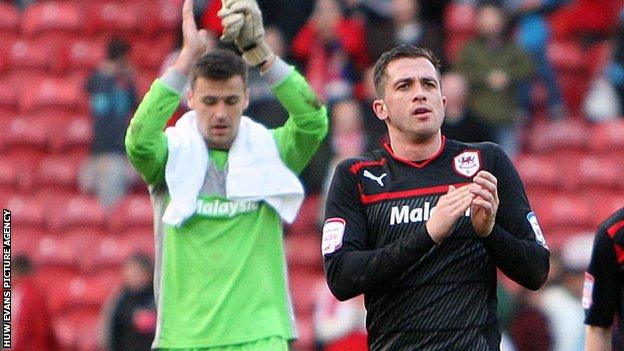 Andrew Taylor says goalkeeper David Marshall has been "massive" in Cardiff City's push for promotion to the Premier League.

Rio Ferdinand compared Marshall to Gordon Banks following a stunning save in Cardiff's 0-0 draw at Watford.

And defender Taylor said: "Marshy's been fantastic for us this season. He's been integral in our promotion push.

"I think he's really come into his own and made some vital saves as seen again on Saturday."

Marshall has so far played in each one of Cardiff's 40 Championship matches this season, keeping 16 clean sheets in total.

"He's made some unbelievable saves in points of games where we needed him to," added Taylor.

"I think he brings the best out of all of us. He's got a good voice, talks to us and organises us - which is what you need. He's also calm and he doesn't get flustered."

"What a save by Marshall...Banks'-ish!" Ferdinand tweeted as he watched the game on television.

After securing a point at promotion rivals Watford on Saturday, Cardiff remain eight points clear of the Hornets and are five points ahead of second-placed Hull City with six games remaining.

Malky Mackay's side will secure promotion if they beat Barnsley on Tuesday and then beat Nottingham Forest on Saturday, providing Watford fail to beat Peterborough on the same day.

"It was important not to get beaten against Watford, now we've got a big game [on Tuesday] which is our game in hand to make the gap bigger," Taylor added.

"We've got to keep our standards high. We showed in our last home game against Blackburn when we play well how much damage we can cause.

"We'll be looking to do the same again [against Barnsley].

"They've been on a good run of form lately and are fighting for their lives just as much as we're scrapping and fighting to get promoted,

"We've got to approach it right and if we don't we'll be left with egg on our face.

"But I think the confidence is high within [the squad] and I think we'll be fine."