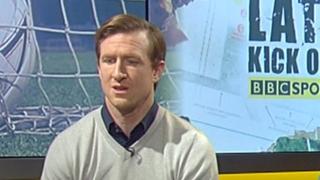 Birmingham City captain Steven Caldwell is backing his club to survive in the Championship after a "strange and disappointing" season.

Caldwell told BBC Late Kick Off Midlands that Blues' struggle for consistency was a major factor in their campaign.

Lee Clark's side are 13th in the table, but only six points above the relegation zone.

BBC Late Kick Off Midlands is available on the BBC iPlayer from Tuesday.