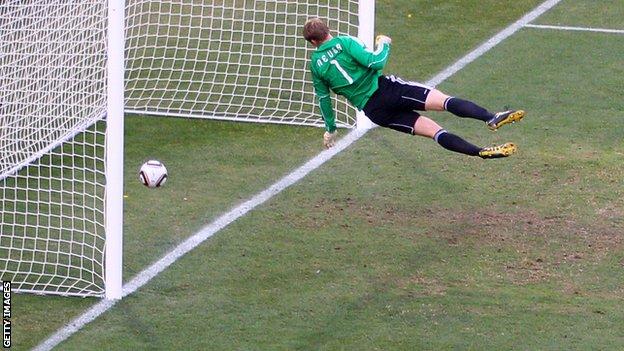 The Football Association expects goal-line technology (GLT) to be adopted by Premier League clubs this week.

Premier League clubs meet on Thursday with GLT set to be agreed for next season, while the FA wishes to install the technology at Wembley.

Technology that says 'yes, the ball has crossed the line' and lets the referee know makes an awful lot of sense to me

"I always thought it was an ideal piece of technology to allow into the game," said FA general secretary Alex Horne.

"The [Premier League] club meeting is on Thursday so I'm expecting it to go through at that meeting."

The FA and Premier League are running a joint-tender process for the supply, installation and maintenance of 21 systems - all 20 Premier League stadiums and Wembley - in an attempt to secure a better deal.

Hawk-Eye, a British-based system well known for providing tennis and cricket with ball-tracking technology, is competing with the three other Fifa-licensed firms - Cairos, GoalControl and GoalRef - to win the contract.

If adopted this week, Wembley, along with the 17 Premier League teams that survive relegation and the three teams promoted from the Football League, will have the necessary equipment installed and verified during the close season.

The FA wants to use GLT for the first time in the Community Shield, which is scheduled to be played in mid-August.

"So technology that says 'yes, the ball has crossed the line' and lets the referee know makes an awful lot of sense to me.

"Particularly where it's a knock-out situation, incorrect decisions have less opportunity to even themselves out over a season."

GLT will also be used in next season's FA Cup, from the third round onwards in any stadium fitted with the system, and Horne sees the technology as a way for the world's oldest knockout competition to keep pace with a football landscape that has changed beyond recognition since the foundation of the Premier League in 1992.

"The FA Cup for me is just one of those fantastic competitions which keeps growing year on year, from strength to strength.

"It gives so much back, particularly to the smaller clubs.

"We generate £65m a year from the competition and over a 10-year period £650m gets reinvested back into football. That's a real fillip for some of the smaller clubs. For example, Luton made £460,000 out of their Cup run, which is a fantastic sum of money for a non-league side."

Next weekend Wembley, which celebrates its 90th birthday on 28 April, will see Wigan take on Millwall and Chelsea meet Manchester City in the FA Cup semi-finals.

Horne said: "[Teams] want to come here and win at Wembley Stadium. So I think the competition is in rude health."