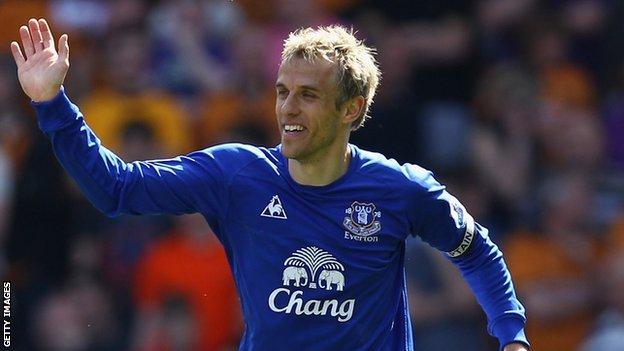 Everton defender Phil Neville will leave Goodison Park at the end of the season.

The former England international joined the Toffees after a move from Manchester United in August 2005.

The 36-year-old's current deal runs out in June 2013 and, while he will not be extending it, he is not retiring.

Phil Neville was also a promising cricketer and in 1992, aged just 15, played for Lancashire's second XI against a Middlesex side including future England Test players Aftab Habib and Richard Johnson.

"I want to continue to play at the top level as long as I can, and will be weighing up my options before making a decision on my next move," he said.

Neville has made 25 outings for Everton this season, with his last game being the FA Cup defeat by Wigan on 9 March, and he has made 303 appearances for the Merseysiders in his spell at the club.

Overall, he has made more than 500 top-flight appearances.

"It's been an honour to play for and captain Everton," Neville told the club's official website. "I've thoroughly enjoyed my time on Merseyside and will leave with immense pride.

"I would like to thank the manager [David Moyes], chairman [Bill Kenwright], all of the staff and the players at Everton for their continued support during my time at the club.

"I'd also like to pay a special thanks to the fans, who have been amazing over the past eight years and Everton will always have a place in my heart."

Everton are currently challenging for a top-four spot and entry into next season's Champions League.

Neville, who can play at right-back or in midfield, added: "I'll now be doing everything I can to help Everton finish as high up the league table as possible."

During the summer, Neville will work as part of Stuart Pearce's England Under-21s backroom staff at the European Championship in Israel.