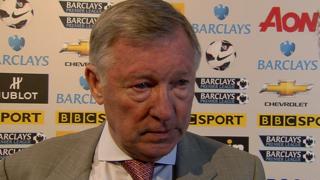 In a high-tempo second half, a Vincent Kompany own goal cancelled out James Milner's opening goal for City, before Sergio Aguero fired in a winner late on.

The loss ends United's run of 18 unbeaten league games but the leaders remain 12 points clear of City, their nearest challengers.