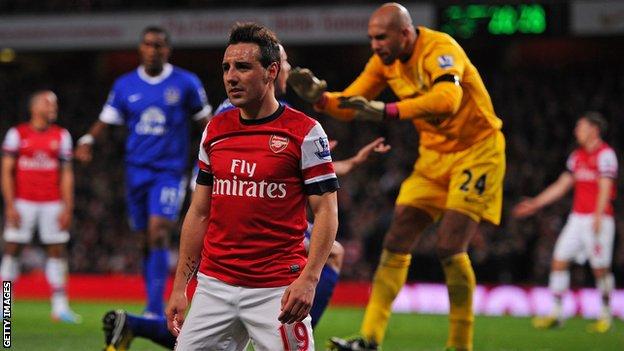 Arsenal's four-match winning run ended with a goalless draw against Everton, a result that did neither side much good in their Champions League quest.

The Toffees, who were fortunate not to have Darron Gibson sent off, started brightly and went close through Steven Pienaar and the lively Ross Barkley.

Giroud was denied by Seamus Coleman's clearance as Everton secured a point.

The Toffees thoroughly deserved a draw in what was a fiercely contested encounter, and are now unbeaten in six league games.

But David Moyes' side, now within two points of fourth-placed Chelsea but having played two games more, were unable to find the goal that would have really improved their prospects of playing in next season's Champions League.

Nor is Arsenal's own top-four place by any means guaranteed and they will need to start more quickly when Manchester United visit on 28 April than in their last two matches at the Emirates Stadium.

Darron Gibson should definitely have been sent off. That's a rugby challenge. He got it very wrong but he's a lucky boy to be still on the pitch

The Gunners conspicuously failed to carry on where they had left off in their previous match, when Arsene Wenger's men scored three goals in the final five minutes to secure a 3-1 victory over Norwich.

Former Toffees midfielder Mikel Arteta, Aaron Ramsey and Jack Wilshere struggled to get a grip in midfield as the visitors' Pienaar skied a glorious chance from Coleman's excellent seventh-minute pass.

Everton boss Moyes opted to start 19-year-old Barkley in place of injured England midfielder Leon Osman for this crucial game and the teenager typified his team's battling first-half display, playing with a maturity beyond his years.

In a bruising encounter, Wilshere was left clutching a sore ankle after falling awkwardly following a fair challenge with Barkley.

Everton midfielder Gibson was then fortunate to escape a red card when he was penalised for a cynical foul on Theo Walcott shortly after he had been booked for bringing down the England international.

Arsenal, chasing a seventh win in eight top-flight games, struggled to hurt their opponents, and were restricted to just a couple of chances in the first half, full-back Kieran Gibbs failing to take advantage of Marouane Fellaini's 24th-minute botched clearance, and Giroud missing from close range after a fine pass by Ramsey.

Wenger's side improved after the interval but still could not find the breakthrough, although Santi Cazorla forced a fine save from Tim Howard with a powerful attempt after Gibbs had nodded the ball into his path.

In an end-to-end game, the tireless Barkley went close with a curling right-foot attempt before Coleman stopped Giroud from sliding the Gunners into a late lead following a surging run by Alex Oxlade-Chamberlain.

"We should have won the game, but it still keeps us in a strong position in the race for the top four.

"I felt that in the first half the referee didn't deal at all well with the intimidating physical challenges, but that we responded well to the physicality.

"It was detrimental to the fluency of our game, but we kept going, had good concentration.

"You have to respect the effort Everton put in. They decided to make it very physical for us to disturb our game and sometimes went a little bit over the edge, but the referee had to make the right decision."

"We went to try and win it. We knew if we got three points we would have a real chance (of the top four), but a point keeps us ticking along.

"I think the result suits Spurs more than anybody, but I don't think we are out of place where we are.

"I would take it (the Europa League), but I am going to try and get the Champions League - if we are still getting that mention in mid-April, then it is not bad for Everton."