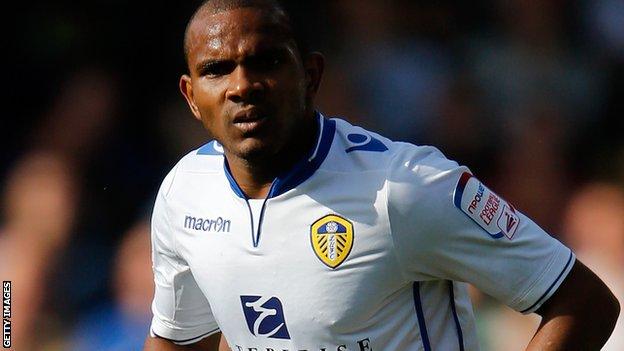 Rodolph Austin scored his first goal since September as Leeds picked up their second win in four days under new manager Brian McDermott.

Jamaica international Austin latched on to El-Hadji Diouf's throughball and swept the home beyond Lee Grant.

Chris McCann had an effort turned away, and Ross McCormack saw a volley saved.

A second straight Championship win lifts Leeds further away from relegation trouble but moves Burnley to within three points of the drop zone.

In the absence of leading goalscorer Charlie Austin, following emergency surgery to remove his appendix, the Clarets created little in front of goal.

Leeds twice went close to taking the lead when defender Jason Pearce's header from Stephen Warnock's cross was blocked by Burnley captain Jason Shackell on the line and Luke Varney reacted quickest to head the rebound on to the bar.

Burnley's Martin Paterson lashed an angled drive inches wide after Ross Wallace had drilled a trademark effort from outside the penalty area into the arms of Paddy Kenny.

Varney was then denied by Grant, who tipped his far post header from McCormack's free-kick over the crossbar, before Diouf showed good technique to control McCormack's pass to clip the ball over the top for Austin to side-foot home.

"I've told the players, I have no fear about a game of football and I want them to have the same philosophy.

"I've learned an awful lot in the last three weeks from what happened to me at my previous club and I hope Leeds have got a better manager on the back of what's happened.

"You want to finish the season strongly. You want to do as well as you possibly can.

"I'm just a bit upset there's only three games left, it's a shame there's not six."

"Leeds showed their experience and that's interesting because the same group of players weren't playing like that two weeks ago because I saw them.

"So that's an interesting one in itself, but we caught them on a night when they were on the front foot and we weren't quite at it.