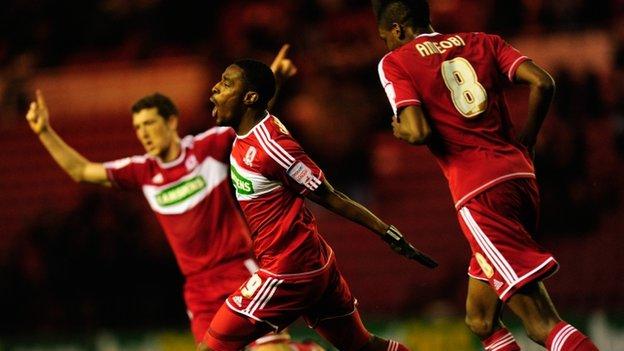 Mustapha Carayol latched on to Josh McEachran's pass before thumping a shot past Karl Darlow just before the break.

Scott McDonald went close to a second but failed to convert a Darlow error.

Forest drop to eighth in the Championship table, a point off the top six, while Tony Mowbray's Boro are six points adrift of the play-offs.

The visitors made the brighter start, with Lewis McGugan at the heart of their early pressure, his cross finding Simon Cox, whose header was tipped over by Jason Steele.

Boro responded against the run of play when McDonald smashed the ball goalwards from 25 yards out, forcing a fine save from Darlow.

But it was Boro who made the breakthrough when Carayol struck before half-time with the Gambian finishing from McEachran's pass for his fourth goal of the season.

Darlow almost conceded a second when he gave possession away to McDonald on the edge of the box, but the Australian was unable to take advantage as defenders scrambled back to cover.

The home side were forced deeper throughout the second half but when Richard Smallwood broke through in the 77th minute and found an unmarked Faris Haroun, Boro should have had their second. But the Belgian substitute somehow clipped over an open goalmouth.

Radoslaw Majewski drove a shot over the bar in added time but Boro stayed calm to take the points and continue Forest's 20-year winless run on Teesside.

"I would be lying if I said it wasn't a relief, we could have had more if we had picked a better pass, been more clinical.

"We were resolute, we had a young midfield in Richie Smallwood and Josh McEachran, and we got the job done against a very powerful Nottingham Forest side.

"Last year we lacked someone like Mustapha Carayol, who could go past people with pace, and I was just sorry that he was out for five months earlier in the season.

"He had had to learn the physicality of the game but is getting there now."

"We started well as we have in a number of games, I thought we had a couple of very good chances. Decision-making at time was careless, they scored against run of play.

"After that it was jittery, chasing things, we had to put strikers on to chase the game.

"We're only one point behind the play-off places so it goes down to the last game. We've got an exciting last three games.

"We don't have a magic wand and there's no margin for error. We want to keep this run going until the last game.