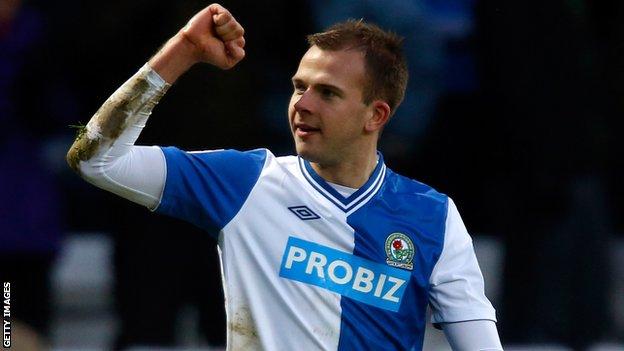 Jordan Rhodes scored to send his former club Huddersfield into the relegation zone and help ease Blackburn's worries near the bottom of the Championship.

Rhodes, who cost a club record £8m from the Terriers in August, netted a close range volley to earn Rovers victory.

But Blackburn held on to record back-to-back victories which leaves them two points clear of the relegation zone.

Huddersfield, who now have one win in five games, drop to 22nd in the Championship table with three games remaining.

The Yorkshire side had goalkeeper Alex Smithies to thank for keeping out Josh King's early 25-yard attempt before Rhodes struck eight minutes before half-time.

The Scotland striker demonstrated his poachers' instincts, hooking home a close-range volley after Scott Dann had headed David Jones's corner back towards goal.

Huddersfield responded through substitute Oliver Norwood, who forced a rare save from Sandomierski before the Rovers keeper was at his best to keep out Beckford's volley on the turn.

On-loan Chelsea defender Todd Kane executed an excellent tackle on Town winger Sean Scannell with no margin for error inside the box in stoppage time to preserve their lead.

"It was a fantastic effort from everybody. We've been attacked in the press all season for reasons that the fans and the players can't control so we've developed a siege mentality over the last couple of weeks and we asked the fans to be part of that.

"It's been a team effort but we aren't going to get carried away. We've just got to stay calm, we've got to stay positive because there's a lot more football to be played.

"You saw why West Ham and other Premier League teams are linked with Jordan Rhodes and long may they continue to be linked in the press from now until the end of the season. I've seen it [the goal] on the laptop and I don't know how he puts it in, but he does."

"The keeper [Sandomierski] made a few good saves - he's made a terrific save from Jermaine Beckford and kept them at 1-0. There was very little between the two teams, they attacked us pretty well in the first 20 minutes and then we managed to get out of our half and try and attack them.

"In all fairness we've not done enough as a team to try and take anything from it but I still feel disappointed because we could have done.

"We have three games left in order to pick up enough points to survive. It'll go down to the wire no doubt."