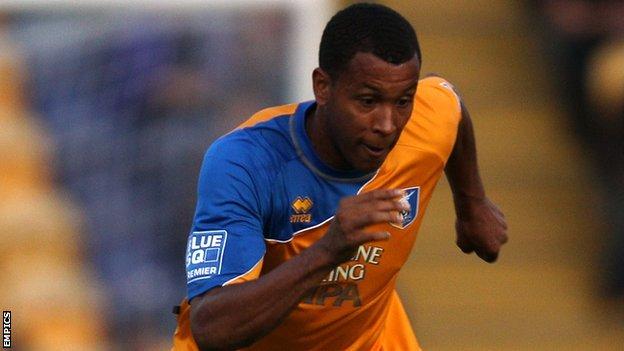 Matt Green's stoppage-time winner put Mansfield in touching distance of a return to the Football League as they came from behind to win at Hereford.

Green's 26th goal of the season moved the Stags two points clear in the Blue Square Bet Premier with one game left.

Hereford top scorer Ryan Bowman slotted in to give the Bulls an early lead, but Green nodded in Lindon Meikle's 37th-minute cross from close range to level.

And the striker then secured a dramatic win, firing into the bottom corner.

Just when it looked as if Mansfield would leave Edgar Street with a solitary point, Green shot home from the edge of the area in the second minute of stoppage time.

Mansfield now know that, if they win at home to Wrexham on Saturday, then they will be Blue Square Bet Premier champions - and back in the League for the first time since being relegated under Billy Dearden and Paul Holland in 2008.

If it is a draw at Field Mill this weekend, then the Harriers can still overhaul the Stags, but only if they beat Stockport County at Aggborough by two goals or more.

If Mansfield lose to Wrexham, then a single-goal victory for the Harriers would be enough.

"I'm losing words to describe Matt Green. The lad just gets better and better. I don't think I've ever celebrated a goal like that in my life.

"The biggest accolade I can give him is that he is a genuinely nice lad with a great work ethic. And he's a good footballer too.

"He's consistently put the ball in the back of the net for two seasons now and I'd love him to cap it off with a promotion, a championship medal and hopefully a golden boot too.

"But we've only done part of the job tonight. We've got another job to do on Saturday. And we know Wrexham won't make it easy for us."