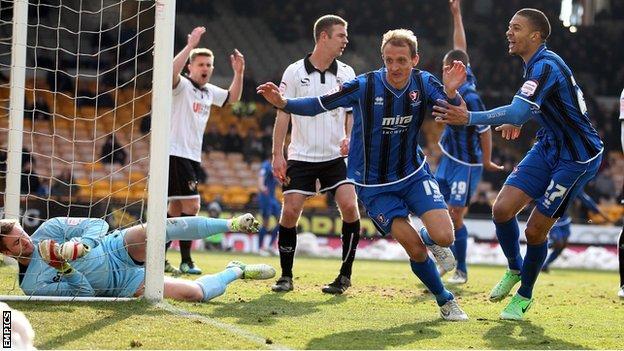 On-loan Cheltenham striker Paul Benson has an "outside chance" of returning from an ankle injury before the end of the season.

Benson, on loan from Swindon, was stretchered off during Saturday's 2-0 defeat by Plymouth, and scans have revealed he has a sprained ligament.

The League Two club are hoping he will be fit to feature in the final game of the regular season against Bradford.

"It was as we expected," said senior sports therapist Ian Weston.

"The indications are that he will be out for the next two games but he could make the Bradford game if all goes to plan and it settles down well.

"If we end up in the play-offs then it will mean Paul will be available for those games and that is a bonus."

Cheltenham are fourth in the table, level on points with Northampton who occupy the final automatic promotion place.

The Robins face league leaders Gillingham at home on Saturday and then travel to Exeter before their final game with the Bantams.

Benson, 33, has been on loan at Whaddon Road since January and has scored four goal in 15 starts.