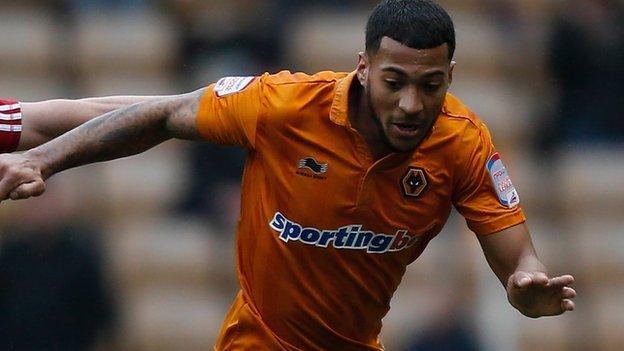 Injury-ravaged Wolves look set to be further depleted for the final five games of the season after losing David Davis with an ankle problem.

The midfielder suffered the blow in Saturday's 2-0 defeat at Bolton and an MRI scan has confirmed ligament damage.

"It's another freak impact injury," said boss Dean Saunders. "I think he's out for the rest of the season."

Davis would become the sixth player to be ruled out for the season for relegation-threatened Wolves.

Keeper Wayne Hennessey has missed the entire season after undergoing a second operation to repair cruciate ligament damage in a knee.

His stand-in Carl Ikeme was ruled out by a freak broken hand injury on 16 March when he punched the dressing room tactics board during a heated half-time debate.

Midfielders Bakary Sako and Dave Edwards both went off within 10 minutes of each other in the same game, and Wolves also lost top scorer Sylvan Ebanks-Blake in the 3-2 win at Birmingham City on Easter Monday.

Ebanks-Blake suffered a broken fibula, as well as ankle ligament damage which not only rules him out for this season but leaves him struggling to be fit for the start of next season.

"It's a man's game. It's unfortunate we've had these injuries just as we've got the team going."

The one minor plus point for Wolves on the injury front is that defender Matt Doherty might only miss Saturday's home game against relegation rivals Huddersfield Town, having also picked up an ankle injury at the Reebok Stadium.

"Doherty rolled his ankle, which is swollen," said Saunders. "He might not be fit for Saturday."

Wolves, relegated from the Premier League almost a year ago, gave themselves a huge boost of avoiding a second successive relegation when they won three times on the bounce either side of Easter.

But, after losing at Bolton, they now head into Saturday's meeting with 21st-placed Huddersfield (13 April, 15:00 BST) on the same points tally as the Terriers, just one clear of danger.

Saunders' side are then at home to Steve Bruce's promotion-chasing Hull City next Tuesday night (16 April, 19:45 BST).