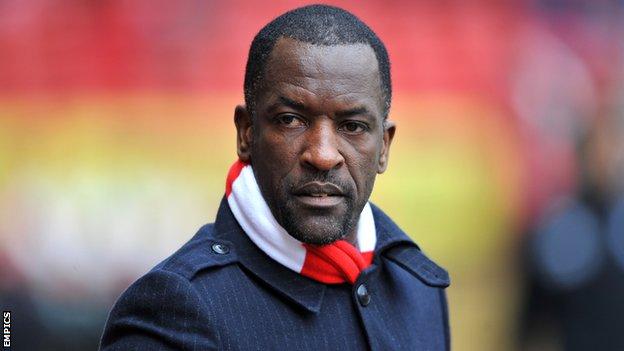 Charlton Athletic manager Chris Powell hopes he can eventually lead the club back to the Premier League.

The Addicks are looking to guarantee their Championship status in their first season back in the second tier since suffering relegation in 2008-09.

Powell told Late Kick-Off London & the South East: "The promised land of the Premier League is where we would like to get to.

"It may take a while, but we are on the way back."

Charlton were relegated from the Premier League in 2007 and two years later they dropped from the Championship into League One.

Powell, who was appointed manager at The Valley in January 2011, remodelled his squad in the summer of that year and went on to win the League One title.

"What happened to the club in the last six or seven years is well documented," Powell added.

"When I first went in it was to get out of League One. We managed to do that in the first full season. Everyone was on board and knew what we wanted.

"It is slow but the ultimate aim and the long-term objective is to get back to the Premier League. Like every other Championship club, everyone is fighting to get there.

After picking up seven points from their last three games, Charlton lie 12th in the Championship - seven points above the relegation zone.

"My remit was to make us a solid and stable Championship club," said Powell.

"When you are a manager, all you want to do is achieve what you set out to do. For me, that was to be a Championship club and to get used to the league.

"Primarily, I have got a League One squad really, with just one or two additions.

"In regards to our budget, we are nowhere near the top half. For us to be where we are right now is very good for us."