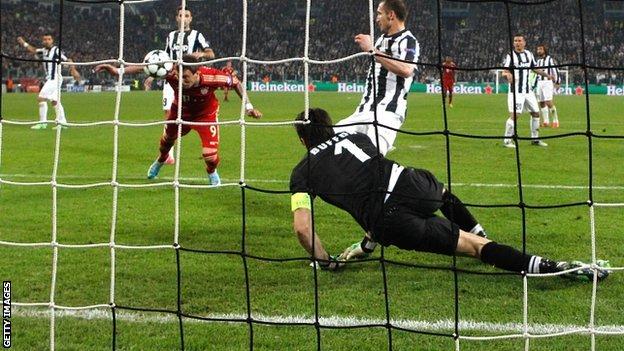 Leading 2-0 from the first leg, the Germans were again comfortable as Mario Mandzukic headed in Bastian Schweinsteiger's free-kick before Claudio Pizarro slotted in late on.

Juve were restricted to Andrea Pirlo's saved free-kick and Fabio Quagliarella's shot which hit the post.

The scoreline mirrored the first leg in Munich, and there was again a gulf in class between the two teams who are top of their respective domestic leagues.

With Bayern Munich and Borussia Dortmund progressing, it is the first time two German sides have reached the Champions League semi-finals

The Bavarians were also runners-up in the 2010 final and, although they could now come up against Spanish giants Real Madrid or Barcelona as well as Dortmund, they will fancy their chances of qualifying for a third final in four years.

Jupp Heynckes' side looked more likely to score from the start and bossed the midfield while keeping the Italian side's attack at a safe distance.

Pirlo's well struck free-kick after 23 minutes was superbly saved by Manuel Neuer but either side of that, Bayern came closer to breaching the Juve defence.

Mandzukic, who will miss the first leg of the semi-final after being harshly booked when appearing to be caught by Giorgio Chiellini, was denied by Simone Padoin's close-range block following Franck Ribery's cross.

Thomas Mueller then smashed wide from 18 yards after a clever chest down by Mandzukic and Gianluigi Buffon stopped David Alaba's top-spinning effort following a corner.

Pirlo, so often the creator for Antonio Conte's team, was seeing plenty of the ball but the hosts were struggling to fashion any chances in the final third, in part down to Bayern's compactness in defence.

That changed after the interval as the home crowd spurred on the two-time European Cup winners and they were inches from going ahead when Quagliarella cut in from the left and struck a shot which clipped Neuer's near post.

It proved to be a brief respite though as Bayern again established midfield control.

Robben collected the ball in the inside left channel and curled a shot against Buffon's post just before the hour mark, before Bayern made the breakthrough after 64 minutes.

Schweinsteiger whipped in a free-kick from the right and, although Buffon did well to repel Javi Martinez's volley, the veteran goalkeeper could do nothing to stop Mandzukic's headed follow-up.

Indeed, Bayern could easily have extended their lead before substitute Pizarro's late effort, but Mueller fired over on the break.

It was a disappointing end to Juventus's European campaign but they will return to Serie A with a nine-point lead over Napoli, confident that they can add another domestic honour.