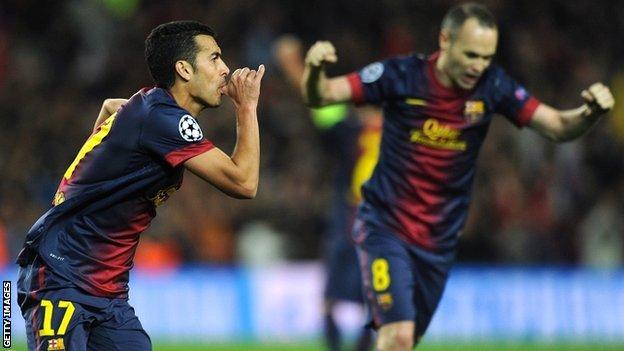 Lionel Messi came off the bench to kick-start a Barcelona fightback as the four-time winners reached the Champions League semi-finals on away goals.

Javier Pastore's clipped finish put Paris St-Germain ahead for the first time in the tie, 3-2 on aggregate.

But Messi, who suffered a hamstring strain in the first leg, inspired Barca and was involved as Pedro hammered home from 15 yards.

Andres Iniesta almost added a second for the hosts after a sublime turn.

PSG manager Carlo Ancelotti ushered David Beckham off the bench in the closing stages, but the former England captain could not replicate Messi's impact on the game as the visitors struggled to force their way back onto the front foot.

Barcelona become the first club to reach the semi-finals of the European Cup six seasons in a row. They were equal with Real Madrid (1955-56 - 1959-60) on five. Barcelona and Real Madrid will both be making their 29th appearance in a European club competition semi-final in this season's Champions League.

For an hour, however, it had seemed as though the French side were to announce their arrival as a new force in the European game by taking the most celebrated scalp of them all.

The Catalans had looked toothless with Cesc Fabregas at the point of their attack and PSG just about deserved their lead before the talismanic Messi arrived in the 62nd minute to wrest control of the game away from the visitors.

Fabregas had scored a 46-minute hat-trick in a 5-0 win over Mallorca at the weekend, but he and his team-mates predictably found a star-studded PSG far more formidable opposition.

With Beckham consigned the bench and Blaise Matuidi suspended for a booking during a midfield pairing of Marco Verratti and Thiago Silva hustled and harried their Barca counterparts.

The visitors tried their luck with shots from the edge of the box and also attempted to exploit their aerial advantage from set-pieces.

That Lucas Moura was among the main threats from distance, firing into Victor Valdes' body, was not a surprise.

But the Brazilian winger also had the best headed chance, outmuscling Jordi Alba at the far post to nod straight into the goalkeeper's gloves.

Zlatan Ibrahimovic was largely outshone by Lucas in the first half, but his sleight-of-foot through ball deserved a better finish than Ezequiel Lavezzi's poke against Valdes's shins.

Aside from an early Xavi free-kick that brushed the side netting, Barcelona struggled to threaten and the first half ended with Messi looking restless on the sidelines.

His mood will only have darkened as another wayward Fabregas shot was closely followed by Pastore's opener.

The offside Lavezzi wisely diverted his run away from Ibrahimovic's weighted pass, allowing his compatriot to hold off the covering Dani Alves and clip his shot over Valdes.

Falling behind for the first time in the tie ratcheted up the tension in the home side's ranks, but the sight of Messi warming up brought relieved cheers and his introduction, at the expense of Fabregas, gave the hosts the composure and penetration they had lacked.

A heavy touch from the Argentine squandered a good opening soon after his arrival, but within 10 minutes he helped create the equaliser with a precise ball into the path of David Villa, whose lay-off was in turn hammered into the corner by Pedro.

PSG packed the penalty area in the final five minutes, but Barcelona held firm and Iniesta almost decorated their win with a wonderful second, spinning past a floundering Cristophe Jallet before firing just wide.