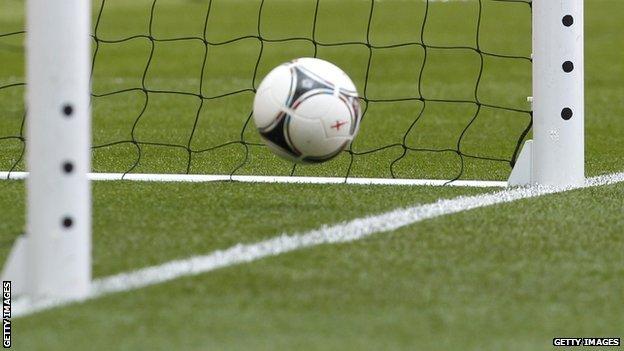 Two camera-based systems have emerged as the clear favourites to be awarded the contract to provide goal-line technology to the Premier League.

Top-flight clubs are expected to vote on Thursday on introducing goal-line technology (GLT).

BBC Sport understands Hawk-Eye, the British-developed system, and GoalControl, a German firm appointed by Fifa to supply GLT to the Confederations Cup and the 2014 Brazil World Cup, are the leading contenders to win the Premier League contract.

It is felt the two systems can provide broadcasters with accurate graphical imagery of goal-line incidents.

The Premier League has said previously that it wants to use GLT "as soon as practically possible" and earlier this week The FA's general-secretary, Alex Horne, told BBC Sport he "expected" clubs to give their final approval when they meet.

The 20 Premier League chairmen will gather in central London on Thursday and are understood to be highly likely to give the go-ahead to GLT so it can be installed in time for the start of next season.

Premier League officials have been in lengthy discussions with the four GLT companies approved by Fifa, football's world governing body, and clubs will receive an update on those negotiations during the meeting.

The two camera-based systems - Hawk-Eye and GoalControl - are understood to hold a competitive advantage over their rivals, Cairos and GoalRef, which both use magnetic fields and a sensor inside the ball to detect if a goal has been scored.

This advantage is believed to stem from the fact that graphical images can be utilised by broadcasters to show viewers at home where the ball has landed in relation to the goal-line.

Hawk-Eye, now owned by Sony, uses seven cameras per goal to detect the ball and claims its system is "millimetre accurate, which ensures that no broadcast replays could disprove the decision". The company already supplies its technology to tennis and cricket competitions, leading to replays of close decisions becoming an established part of the match experience for viewers.

GoalControl also uses high-speed cameras around the pitch to track the ball.

The German firm claims replays showing if a goal has been scored or not can be delivered instantaneously and "be broadcasted to the fans at home or shown on the big LED board in the stadium".

Both systems notify the referee if the ball has crossed the goal line via a vibration and optical signal sent back to the officials' watches within one second.

The International Football Association Board (IFAB), the body which determines the laws of the game, authorised GLT in July 2012 and it was used in competition for the first time last December during the Fifa Club World Cup in Japan.

Installation of either system for the 17 Premier League clubs who avoid relegation and the three teams promoted from the Football League is expected to take up to six weeks to complete.

The FA wants to have a system installed at Wembley in time for the Community Shield which is scheduled to take place in mid-August.