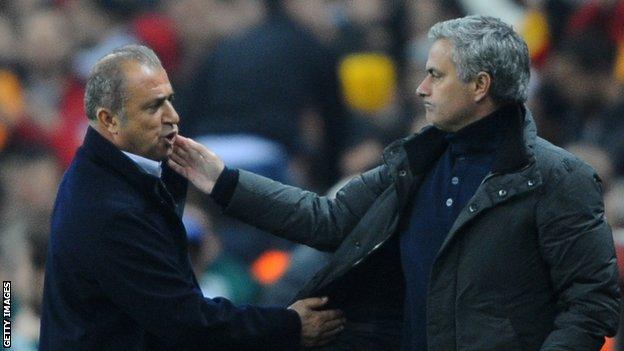 Real Madrid coach Jose Mourinho insists his team are not afraid of any of their potential Champions League semi-final opponents ahead of Friday's draw.

The Spanish champions beat Galatasaray 5-3 on aggregate in the quarter-finals and could now face Barcelona, Borussia Dortmund, Paris St-Germain, Bayern Munich or Juventus in the last four.

"We don't know who we will play but it will be hard," said Mourinho.

"Yet it is the time to enjoy ourselves and not be nervous or afraid."

German side Dortmund are the only other team assured of their last-four place, with Barcelona facing PSG and Juventus meeting Bayern in Wednesday's final two quarter-final second legs.

They started Tuesday's game with a comfortable 3-0 advantage from their home leg and seemed to put the tie beyond the Turkish champions with Cristiano Ronaldo's early away goal.

It left Galatasaray needing five goals to eliminate the nine-time European champions and reach their first semi-final in 24 years.

But Ronaldo's second goal in injury-time - his 46th strike in 45 games this season - ended the home side's resistance.

"I wasn't getting nervous because I have no time for it," said Mourinho.

"I am on the bench so I have no time to think or to feel it. The players are strong mentally. They didn't play against 11, they played against 50,000 and it was hard for us.

"It was the kind of match where you have everything to lose and nothing to win."

"Maybe we could not knock Real Madrid out of the competition but I think we deserve the respect of the whole world," he said.

"Our half-time team talk was about the desire not to lose the game and this brought the victory. We need to keep our heads high and continue our way.

"I hope Real Madrid win the Champions League and we can say that we lost to the champions."