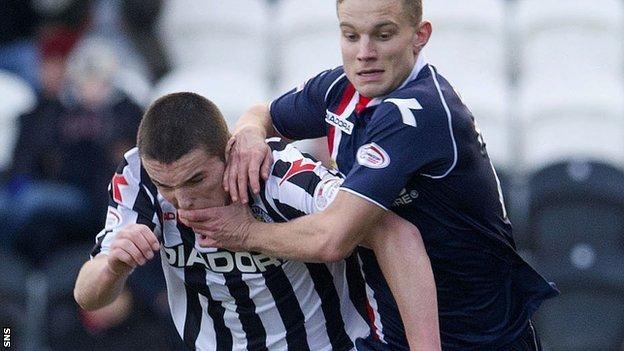 Proposed changes to Scottish football have suffered a setback after it emerged that information required for clubs to vote on the matter has not been provided.

Clubs in the Scottish Premier League and the Scottish Football League are being asked to consider new leagues of 12, 12 and 18 from the present four.

But it is understood that the SFL has still not allowed access to documents.

SFL clubs are due to vote on the proposal next Friday.

Following a meeting between Scottish football's three governing bodies, the SFL had requested assistance from the Scottish Football Association in providing financial due diligence.

That is seen as vital to help clubs decide how to vote on the proposed new set-up, which would result in a merger between the two league bodies.

However, it is believed that, despite requests from the SFA, the SFL has still not allowed access to its financial details.

The SFL vote would be scrapped should the SPL clubs fail to achieve the required 11-1 majority in their own ballot on Monday.

Motherwell have become the latest SPL club to say they will vote in favour of the new league structure.

However, St Mirren have already come out strongly against the proposal and Ross County chairman Roy McGregor has voiced his own doubts.

McGregor has, though, stressed that he sees some merit in the proposals and that it will be a decision for the Dingwall club's whole board at its meeting on Friday.

Dundee United chairman Stephen Thompson believes that there is still time to change the mind of clubs who might be against the proposal.

"It is not dead at all and I'm quite excited that we might be able to do something to change the game in Scotland," he told BBC Scotland.

"I am quite hopeful there's going to be a lot of pressure put on lots of people this week.

"It's this or nothing else and I think it could be many years before we get back to the table and get as many clubs in agreement about taking the game forward."

Thompson insisted that his club was not voting out of self interest as there were aspects of the proposal with which United are not totally happy.

"It's not perfect, but there's enough in it for my club to vote for it," he said.

"There's a huge amount at stake here. I am trying to take my club hat off and think of Scottish football.

"If it was purely about my own club, I wouldn't vote for this because in some respects it gives you a great chance of being relegated."

Thompson believes that First Division clubs, presently struggling to maintain full-time playing squads, would benefit most from the proposed redistribution of income.

It is believed that all but one Division One club are in favour of the proposal.