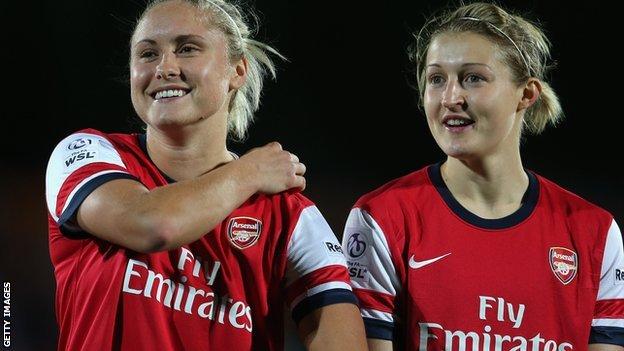 The FA Women's Cup is set to change hands after holders Birmingham City were handed a 6-0 quarter-final drubbing at 11-time winners Arsenal.

White and Davison each netted again after the break, with midfielder Kim Little also getting on the scoresheet.

Arsenal will meet Liverpool in the semi-finals.

Davison put the Gunners on the way to the last four after just 11 minutes, driving home a well-struck 18-yard shot.

As the home side looked for a quick second goal both left-winger Rachel Yankey and White sent long range efforts narrowly over the bar.

But Nobbs was bang on target as she doubled the lead with a superbly struck 25-yard drive on the half-hour.

And two minutes before the interval White headed in a Yankey cross to leave Blues with a massive second-half task to force their way back into contention.

The task proved well beyond the visitors, who were effectively out of the Cup when White swept home her second goal from Yankey's 52nd-minute pass.

And, as the Gunners cruised to victory Davison grabbed the sixth goal in the 75th minute, racing clear of the Blues defence to slot in her second of the night.

Arsenal's semi-final meeting with Liverpool is scheduled for Sunday 28 April.

Lincoln are also through to the last four and will face either Bristol Academy or Everton, who meet in their delayed quarter-final on Sunday.