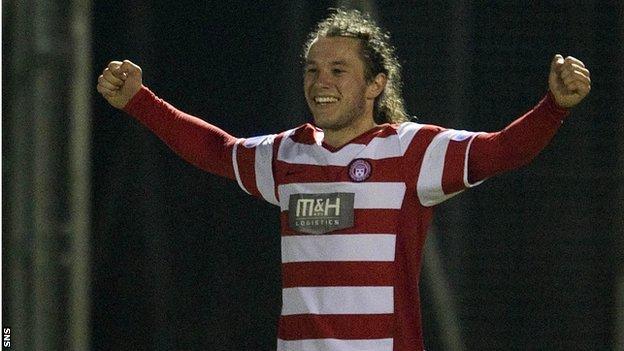 Steven May bagged a hat-trick as Hamilton Academical thrashed relegation-threatened Airdrie, who also ended the game with 10 men.

Airdrie had gone into the game having been given renewed hope of survival after Dunfermline Athletic were docked 15 points for going into administration.

It meant that the Diamonds now had an eight-point gap between themselves and the second bottom team instead of 10.

But May opened the scoring for Accies from the penalty spot in the ninth minute after Steven Hetherington had fouled Grant Gillespie.

They doubled the advantage 13 minutes later when Jon McShane turned in May's cross.

Victory was all but assured eight minutes before the break as May added his second with a neat finish inside the area.

The visitors had no response for the rampant Accies, who continued to dominate after the break.

May added his third with a fine strike from the edge of the penalty area 16 minutes from time, before Michael Devlin saw red for a second bookable offence.

Substitute Eamonn Brophy added further gloss three minutes from time to keep the Diamonds rooted to the foot of the table.