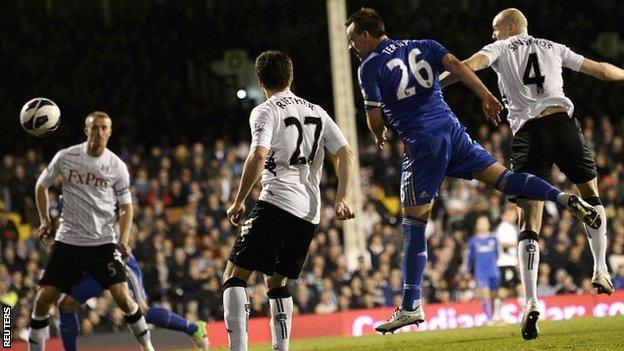 Fulham could have gone ahead early on but Bryan Ruiz fired a volley over from five yards, before Petr Cech saved Urbi Emanuelson's shot.

Luiz then crowned his 100th Chelsea appearance by smashing a 35-yard shot past Mark Schwarzer after 30 minutes.

Terry stole in to score back-post headers either side of half-time.

The Chelsea skipper, back in the side after being omitted from the FA Cup semi-final defeat by Manchester City on Sunday, made a triumphant return to keep Chelsea's Champions League qualification ambitions on track.

Rafael Benitez's side are now a point above the Gunners with a game in hand as their Spanish interim manager prepares to take the Blues to his former club Liverpool on Sunday.

The victory, which ended a run of three Premier League defeats away from home, came thanks to a clinical finishing display that put the game out of Fulham's reach before the interval.

In keeping with a run of one defeat in their last seven Premier League games, Martin Jol's side were in the ascendancy early on but they once again fell to defeat by their west London neighbours, extending a remarkable run of just one win in 33 years.

Luiz finds joy away from home

David Luiz's strike was his first Premier League goal away from Stamford Bridge. His first five in the English league had all come on home soil.

Had Ruiz scored from Sascha Riether's right-wing cross or John Arne Riise injected more power into his shot halfway through the first half, the picture might have more closely reflected the game's flow.

However, it was Chelsea who took the lead, and in spectacular style as Luiz collected Eden Hazard's square ball and fired a stunning drive into the top corner.

Fulham almost replied instantly when Emanuelson cut in from the left and his effort was superbly tipped around the post by Cech. Dimitar Berbatov was then narrowly off target with another strike.

The hosts soon paid the price as Chelsea went further ahead two minutes before the break.

Frank Lampard, aiming to take a step closer to Bobby Tambling's record of 202 goals for Chelsea on his 600th appearance, fired in a swerving free-kick that Schwarzer chose to save with his chest.

The resulting corner was initially cleared, but Juan Mata crossed to the back post where Terry thumped his header in.

Fulham's first-half woe was summed up by a booking for Ruiz, who stumbled under close attention from Terry and was booked for diving by referee Mike Dean.

Chelsea began the second half knocking the ball about with the confidence of a side with a two-goal cushion and Mata was inches away from making it three when he failed to reach Torres' cross.

At the other end, in a sign that it was not to be Fulham's night, Mladen Petric managed to divert team-mate Philippe Senderos's goalbound header over the bar while standing on the line.

Minutes later, Terry grabbed his second from another corner to put the game out of sight, nodding in at the back post after he was found by Torres' near-post header.

"If that is a dive, it's ridiculous, he lost his balance. Of course a player can lose his balance and fall down but it's never a booking. The only thing I said [to the referee] was that is why I can see you never played and I think he agreed.

"We couldn't get the goal we should have had in the first few minutes; Dimitar Berbatov had a few shots, Urby Emanuelson, Giorgos Karagounis and Mladen Petric had chances, but we didn't get the break and then it's always difficult. And then 3-0 if you didn't see the game, it was a bit harsh."

"I have seen him in training sessions scoring lots of goals and free kicks so he has the ability and the quality, he's very good player.

"Obviously to win is very important, to win with a clean sheet and scoring three goals is more important and to win a derby is even more important, so there are lots of positives.

"You talk about other teams [challenging for the Champions League], they have also players with experience. The main thing is to concentrate and use the quality that we have and stick together as a team. Everybody knows we have to be ready for every game, change players - they have to be ready because we still have two games a week."