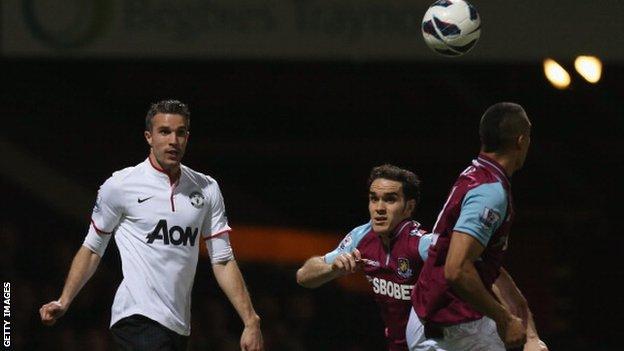 Manchester United inched closer to regaining the Premier League title despite being held to a draw by West Ham United at Upton Park.

Robin van Persie's controversial equaliser 20 minutes from time rescued a point for United as they struggled for long spells to discover the form that has led them to the brink of a 20th top-flight crown.

Mohamed Diame's stunning strike then restored West Ham's lead before Van Persie turned in United's second in the 77th minute after Kagawa's deflected shot rebounded off both posts - although replays showed the Dutchman was in an offside position.

United's lead now stands at 13 points after second-placed Manchester City beat relegation-threatened Wigan but this was a performance that smacked more of a stroll towards the finishing line than a triumphant dash.

The fact that the title is now a formality has perhaps taken some of the edge off Sir Alex Ferguson's side but it is only matter of time before they will be champions again.

The extent of United's struggles, at least until a trademark period of late pressure, was summed up by Wayne Rooney, who was desperately poor and could have no complaints when he was substituted with 20 minutes left.

Andy Carroll's failure to establish himself at Liverpool and subsequent injury problems at West Ham have curtailed his England career - but his lively display will have impressed watching England manager Roy Hodgson.

He played a crucial role as West Ham took the lead after 16 minutes. Matt Jarvis escaped from Rio Ferdinand far too easily to find Carroll at the far post and he nodded back for Vaz Te to throw himself forward and score with a diving header from six yards.

West Ham have scored twice in each of their last three home games against Manchester United but have not won any of them.

United's response was subdued but they drew level with the smoothest of equalisers 14 minutes before half-time. Kagawa demonstrated perfect balance and footwork to skip through the Hammers defence and set up a simple sidefoot finish for Valencia.

Carroll had been West Ham's main threat but he infuriated Ferguson moments before the interval when he recklessly launched himself at a corner, taking out Patrice Evra and United keeper David de Gea in the process.

Nothing had been seen of Rooney but he finally made a contribution of some significance right after the restart when his perfect cross found Van Persie, whose header was just behind Phil Jones, however, meaning the defender was unable to make a proper connection.

Having escaped punishment for the earlier incident, Carroll was then booked by referee Lee Probert for a harmless looking tangle with De Gea after the keeper collected a cross.

Carroll then gave De Gea another anxious moment, this time with a long-range dipping effort that went into the side netting.

West Ham were playing with far more purpose at this stage and were rewarded in spectacular style with a second goal after 55 minutes. Diame, a real talent, eluded Rooney with embarrassing ease before firing a low, angled drive beyond De Gea from 20 yards.

Rooney almost snatched another equaliser when Jussi Jaaskelainen fumbled his half-hit shot from a corner but Gary O'Neil was on the line to rescue West Ham's veteran keeper.

The Finn was in more accomplished action to turn Van Persie's header over the top before Ferguson made his first change with 20 minutes remaining.

Despite the fact that United were trailing, it was little surprise that Rooney was the man replaced by Ryan Giggs after a performance lacking in intensity and quality.

As ever with United, even when below their best they possess a threat and so it proved again as they restored parity once more with 13 minutes left. Kawaga's shot from the edge of the area deflected off James Collins and hit both posts before Van Persie turned in from a very tight angle.