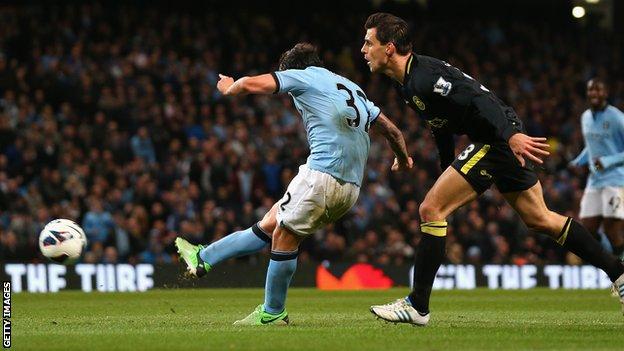 City struggled at the Etihad Stadium and were grateful for a fine Joe Hart save from Wigan striker Franco Di Santo in the first half.

But Tevez slipped past Paul Scharner and Jordi Gomez before hitting a shot into Joel Robles' top corner.

City moved to within 13 points of leaders Manchester United, while Wigan remain three points from safety.

Following their impressive form of recent weeks, this was a return to the listlessness that saw City's Premier League title defence fall away in the middle phase of the season.

Argentine striker Sergio Aguero was withdrawn at half-time and there had been little spark from Yaya Toure, Samir Nasri or Tevez, with manager Roberto Mancini blaming tiredness after Sunday's 2-1 FA Cup semi-final win over Chelsea for his team's underwhelming display.

But Tevez finally struck in the 83rd minute to secure an eighth win in nine league and cup matches.

Wigan ultimately came away with nothing, but this was a performance suggesting both that it is folly to write off the Latics' hopes against City in next month's FA Cup final, and that Roberto Martinez's team must have confidence they can once again avoid relegation.

They trail Sunderland, Stoke and Aston Villa by three points and still have a game in hand over all three going into their trip to West Ham at the weekend.

Carlos Tevez now has 84 goals in 196 Premier League appearances, exactly the same record as Cristiano Ronaldo has in the Premier League.

After a ponderous opening, it took news that West Ham had taken the lead against United to galvanise the crowd but Wigan had the better opportunities in the first half.

For the hosts, Aguero skipped infield past Emmerson Boyce and Scharner and bent a shot just beyond the far post.

But the visitors passed up two clear chances to take the lead in the space of a minute.

A long ball from Di Santo caught out Joleon Lescott, and Arouna Kone failed to control when he would have been clean through on Hart.

And after Shaun Maloney flicked a Kone pass into Di Santo's path, the Argentina international drifted past Lescott and Gareth Barry before a low save from Hart denied him.

Wigan goalkeeper Robles was worked for the first time when he tipped a mis-hit cross from Aleksandar Kolarov around the post.

Mancini brought Edin Dzeko on for Aguero but it was Wigan who continued to carry the greater threat.

Maloney eased past Richards and hit a bending shot that beat Hart but was hacked away by Lescott, before Kone also sliced wide after a quick break.

An impressive sliding challenge from Vincent Kompany then blocked Kone's close-range effort after passes from Maloney and Di Santo had cut the City defence open.

Tevez dragged a shot wide as City's desperation mounted but Hart was worked again when he pushed away a Callum McManaman effort.

Home frustration was finally ended when Kolarov picked out Tevez and the Argentine beat two Wigan defenders on the edge of the area before steering a shot into the top corner for his 11th league goal of the season.

The goalscorer then missed narrowly with a free kick in added time, but his solitary strike was enough to earn City's seventh straight win over the Latics.