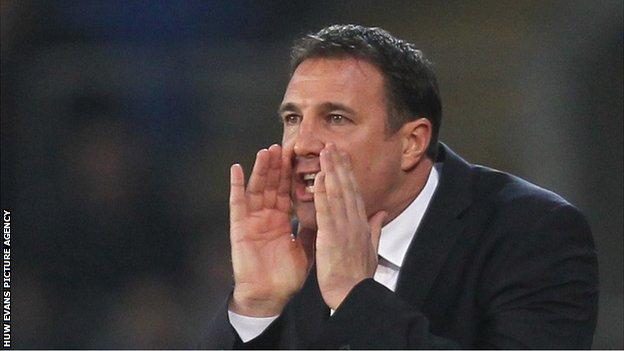 Ben Turner's goal looked set to take Cardiff to the brink of promotion on Tuesday, before Stephen Foster struck for the Tykes in the last few seconds.

Mackay was consoled that the draw extends Cardiff's advantage over Hull to six points and over Watford to nine.

"I'm disappointed for the players not coming out with three points," he said.

"What I have told them is that they're another point further ahead of everyone else in the league.

"So it's about making sure we keep that sort of performance and consistency."

Cardiff need seven points from their five remaining games to guarantee promotion to the Premier League, although that figure will fall should third-placed Watford drop any points in their last five fixtures.

Mackay concedes that Cardiff should have capitalised on their dominance against relegation-threatened Barnsley to score more than their solitary goal.

"At 1-0 a freak goal can happen like that one but we're playing well and I've got a great group of players there, and I'll go to war with them any day of the week.

"I'm absolutely delighted that we are the points ahead that we are at this point of the season, with so few games to go."

The Bluebirds remain at home for their next two games, starting on Saturday when Nottingham Forest arrive at Cardiff City Stadium seeking to secure their own place in the play-offs.

"They always are [hard games], it's always going to be the same in that league," Mackay said.

"We've got a tough game against Nottingham Forest on Saturday and I'm going to ask that the fans come out in droves again like they did [against Barnsley] and get behind the team to the last.

Mackay also revealed that he is hopeful of extending the stay of Norwich City defender Leon Barnett, who is due to play his last Cardiff game against Forest before his month-long loan deal expires.

Barnett has impressed in a central role since arriving as emergency cover for Bluebirds captain Mark Hudson, ruled out for the rest of the season by an ankle injury.

Keeping Barnett until the end of the season has become even more of a priority as fellow defender Matthew Connolly is still an injury doubt, as is striker Fraizer Campbell.

Both players sat out the draw with Barnsley and will be assessed ahead of the Forest game.