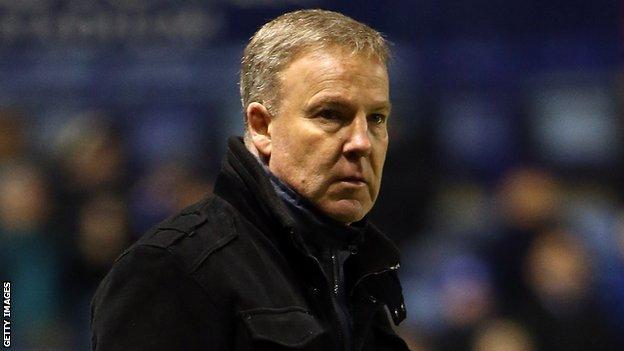 Millwall manager Kenny Jackett says a lack of cutting edge was to blame for their defeat by Sheffield Wednesday.

The 2-1 loss on Tuesday leaves the Lions five points above the Championship relegation zone.

He told BBC London 94.9: "For long periods we were on top and didn't do enough going forward.

"We couldn't find the final pass or the finish. That was a winnable game that we were in charge of and we let it slip through our fingers."

We had a lot of control of the game and it was there for the taking. We didn't have the forwards to win us the game

Millwall had gone ahead at the Den through Jimmy Abdou's second-minute goal, but Miguel Llera's free-kick drew Wednesday level before half-time and a goal from Chris Maguire won it for the Yorkshire side in second-half injury time.

It was Millwall's first defeat in five Championship games and Jackett felt his side did not take advantage of their opportunities.

"Away from home your defensive set-up gets you points," he added.

"At home your forwards win you games.

"We had a lot of control of the game and it was there for the taking. We didn't have the forwards to win us the game.

"It is very frustrating for me. We need to be able to put sides away.

"There wasn't a lot wrong with our performance but going forward, I don't think we did enough."