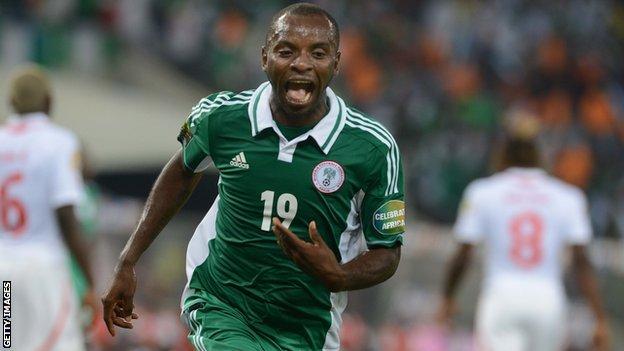 Nigeria's Sunday Mba is keen to get his promising career back on track.

He has not played club football since scoring the Super Eagles' winning goal in the Africa Cup of Nations final in South Africa two months ago.

The 24-year-old is currently at the centre of a transfer row between Nigerian Premier League clubs Warri Wolves and Enugu Rangers.

"It's frustrating when you train hard but are then prevented from playing football," he told BBC Sport.

Back in January Mba believed he was free to leave Warri Wolves for another Nigerian Premier League club.

I want to play football, I want to live my dream and right now I'm losing out on that desire.

But the Nigeria Football Federation (NFF) ruled in March that he still has a valid contract with Warri Wolves and that Enugu Rangers, who he wants to join, must pay a transfer fee.

However, the two clubs are yet to agree a fee for the midfielder.

"My career was given a big lift after the tournament in South Africa but everything looks dark at the moment," he said.

"I wanted to continue my progress in the league and hopefully move to Europe when the right offer and club approach my team.

"Sadly I'm at a crossroad and this is not my own doing, the exact reason it's frustrating and depressing."

His lack of playing time meant he struggled to impress for Nigeria last month as the African champions were held to a 1-1 draw by Kenya in a 2014 World Cup qualifier.

"I hope it can be concluded as soon as possible because I need to get my career going," he said.

"I'm training with Enugu Rangers, they are making a strong effort to get it sorted but somehow it's still not sorted.

"I want to play football, I want to live my dream and right now I'm losing out on that desire.

"I can only appeal to those involved to consider my career and come to agreement because my development is suffering."

Despite his lack of playing time Mba has been included in Stephen Keshi's squad for the Super Eagles's World Cup qualifiers and their Confederations Cup campaign in Brazil in June.

As well as scoring the only goal of the Nations Cup final against Burkina Faso he also grabbed the winner in Nigeria's 2-1 quarter-final win over Ivory Coast in South Africa.