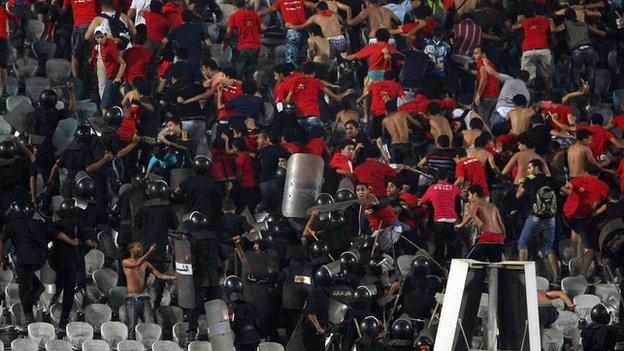 Egypt's sports ministry has announced that supporters will be banned from upcoming continental club matches to be played in the country.

There were also problems at an Arab Champions League match involving Ismaili.

In a statement the ministry said it had taken the action "in order to protect and guarantee the safety and security of the fans, teams and the facilities themselves."

The latest ban means there is little likelihood of fans being allowed to watch domestic league matches.

Supporters have not been allowed in to stadiums to watch domestic games since the league started in February, but limited numbers have been permitted to watch continental action in both the African and Arab Champions league.

Prior to that there had been no league action in Egypt for a year following the Port Said stadium disaster, which left over 70 fans dead following violent clashes at a game between Al Ahly and Al Masry.

However, the ministry stopped short of preventing fans from attending international matches.

A limited number of people were allowed into the stadium to watch Egypt beat Zimbabwe 2-1 in a 2014 World Cup qualifier last month.