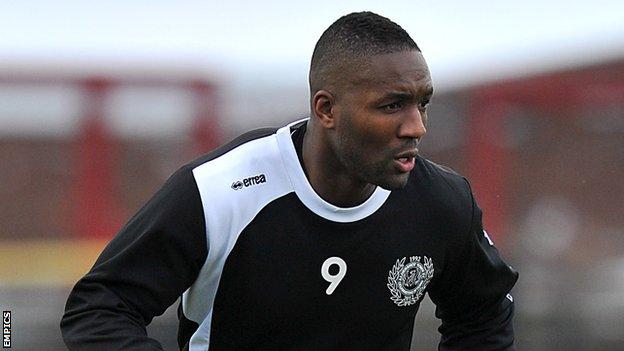 Aldershot Town striker Michael Rankine says he wants to repay manager Andy Scott after being recalled from his loan spell at York City.

The 28-year-old came off the bench in the draw at Port Vale, which left the Shots just one point below 22nd place.

He told BBC Surrey: "The gaffer has showed a bit of faith in me. He didn't really have to bring me back.

"I just want someone to believe in me and he has showed he believes in me. It is time for me to repay the favour."

Rankine returned to the EBB Stadium last month after scoring one goal in eight appearances during his stay at York, which was due to last until the end of the season.

He added: "I always know what I am capable of and with the right chances and not being set up to fall I will always deliver.

"No matter what anyone says, I will always run until I can't ran any more and will run through walls for people who show faith in me.

"A lack of proper chances has been hard for me, coming back from an injury.

"I've got five games now I can show the gaffer and the Aldershot fans what I am about as I don't think I've done myself justice."

Rankine scored one goal in 20 appearances for the Shots this season before former Aldershot boss Dean Holdsworth, who was sacked in February, decided to send him out on loan.

He spent a month at Grimsby, where he made three substitute appearances, and then played three games for Aldershot before joining York in February.

Rankine is grateful to have another opportunity to prove himself as the Hampshire club aim to avoid relegation to Blue Square Bet Premier.

"Football is a strange game," Rankine said. "Dean had his views and the new gaffer has his views. All I want to do is play football and that is all I can ask for.

"I don't think I was given the best chance. I didn't really play in pre-season after being out for seven months and then I came back and was thrown in the deep end.

"Then I'd fatigue and people think I'm lazy, but I won't be bitter. I will just keep working.

"I did think my Aldershot career might have been done but football is a strange game."

Scott, who has only suffered two defeats in nine games since being appointed Aldershot manager, says Rankine is eager to impress after returning from their relegation rivals.

"We were surprised York allowed Ranks to come back but they did so hopefully that will bite them on the backside," Scott told BBC Surrey.

"He gives us something a little bit different. He hasn't had a great run of things here and he has got a point to prove.

"You are only as good as your front two in this league and now we have options on the bench to change it."