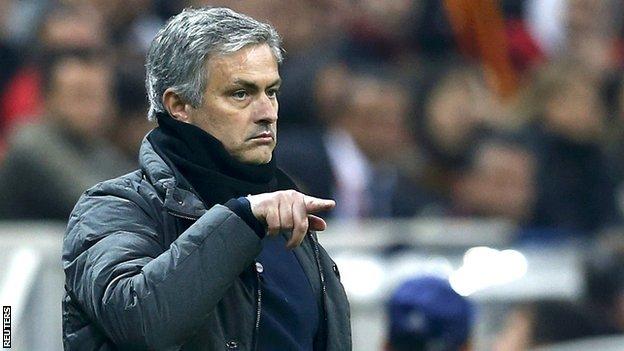 Jose Mourinho says he will discuss his Real Madrid future with the club at the end of the season.

The Portuguese manager, 50, has guided his team into the last four of the Champions League but a poor domestic showing has led to speculation about his future.

Mourinho has a contract at Real until 2016 but has been linked with a return to the Premier League in England.

"When the season ends I will sit down with who I have to," he said.

There have been suggestions that Mourinho could make a return to Chelsea, where current interim boss Rafael Benitez intends to vacate the post by the summer.

Paris St-Germain is another possible destination, should a vacancy arise and Real's coach look to leave Spain.

But Mourinho, who praised club President Florentino Perez after the 5-3 aggregate Champions League win over Galatasaray on Tuesday, insisted speculation should cease until the season is complete.

"We will sit down quietly and talk about my future, like two friends," he said.

Despite a disappointing La Liga campaign, with Real currently 13 points behind leaders Barcelona, Mourinho remains one of the most respected and coveted coaches in Europe.

While at Chelsea, Mourinho secured six trophies in three years, including the Premier League twice and the 2007 FA Cup.

And as far back as December 2011, the Portuguese was stating his intention to one day manage again in England, saying: "My next step will be to go back [to England] if possible and stay for a long time. [My] passion is in England."