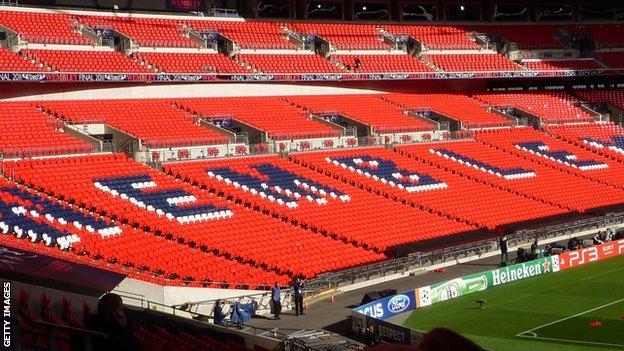 Wigan Athletic have so far failed to sell at least 10,000 of their allocated tickets for Saturday's FA Cup semi-final against Millwall.

The Football Association has taken the unprecedented step of opening a neutral zone for 6,000 fans, and made a further 1,500 seats available to troops.

Wigan's route to the final

Both clubs were allocated just over 31,000 tickets and Millwall are expected to sell their full complement.

It is understood the FA expects at least 14,000 empty seats at Wembley.

The 6,000 neutral seats, in an area that was originally a Wigan section, will only be sold to supporters who are already registered on the FA's ticketing database.

Wigan's failure to sell out their section is not altogether unexpected, with the club averaging just short of 19,000 for home matches in the Premier League this season.

Jason Taylor, a committee member of the Wigan Athletic Supporters' Club, has pointed to several mitigating factors, including the size of the Greater Manchester club's existing fanbase.

"They are continuing to grow but we are still a long way behind Manchester United, Liverpool and Everton, who have a lot of fans in the town.

Wigan's route to the semi-final

"We have already sold more than our average attendance and we have only got around 12,000 season ticket holders, with around 25% of those aged under 16.

"So even if we sell 20,000 tickets then we have sold thousands more than usual."

Taylor said many fans were unable to travel to London by train with the last service back to Wigan leaving the capital at 20:30 BST. It means fans would not have enough time to get to Euston station from Wembley after the final whistle.

He added some supporters have decided to sacrifice going to the match in order to save money for the final - should Roberto Martinez's team reach the 11 May showpiece.

Tickets are still available for Sunday's semi-final between Manchester City and Chelsea, although that match is expected to sell out in the next 24 hours.

Wigan Athletic declined to give details of exact ticket sales when asked.