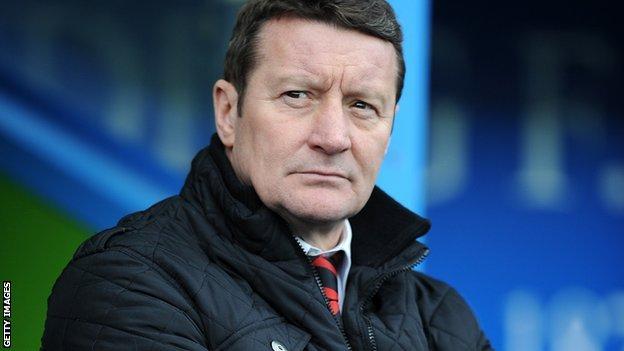 Sheffield United boss Danny Wilson has urged his team to pick themselves up after the 2-0 home defeat by Crawley on Tuesday.

The Blades are currently fifth in League One and have won just one of their last six games but have two games in hand on second-placed Bournemouth.

Sheffield United have not scored at Bramall Lane since the 3-0 win over Colchester United on 16 February.

Wilson told BBC Radio Sheffield: "There's a question people might level at us which is understandable.

"We have to persevere. We can't just give up and down tools."

He added: "We've got five games left and if we win them all then we'll be up there.

"There'll be a great atmosphere here on Saturday [against Swindon] because they are one of our nearest rivals and there's no better game to bounce back in."

Wilson's side have failed to score in their last four outings at Bramall Lane and now face successive home matches against play-off rivals Swindon and Brentford.

Meanwhile, the former Swindon and MK Dons boss refused to blame defenders Neill Collins and Harry Maguire for their individual errors in the defeat by the Red Devils.

"We've been done by a couple of mistakes from two lads who have been fantastic for the last two seasons," he continued.

"Unfortunately it has cost us but we have had a lot of chances and we've been unlucky in some respects."