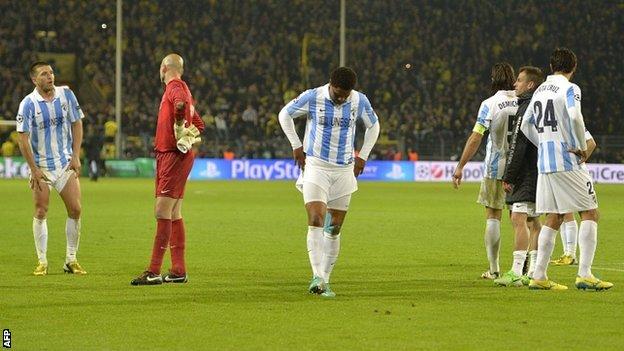 The Bundesliga side scored twice in injury time to complete a stunning 3-2 win and move into the last four.

"It will now be analysed by our disciplinary inspectors," said UEFA general secretary Gianni Infantino.

Speaking at the Soccerex conference, Infantino added: "They will act if they have to act depending on what has been said.

"I can understand when you lose a match in the 93rd minute the emotions come up and maybe you say things that you don't really think and you really don't want to say."

Al Thani said on Twitter: "I'm sorry to go out this way, injustice and racism."

He added: "This is not football, but racism and clear of all.

"I hope to open a thorough investigation [by] Uefa regarding the Spanish club [going] out in this way."

Malaga plan to make a formal complaint about Scottish referee Craig Thomson and his officiating team.

Al-Thani, of the Qatari Royal Family, was named owner of Malaga in June 2010 after the 53-year-old bought the Spanish club.

A series of off-the-field financial problems mean Malaga are banned from European competition for one season when they next qualify.

Malaga coach Manuel Pellegrini said: "Football is an act that involves many factors.

"The third goal was an offside goal and there were all kinds of elbows and punches."

After the first leg in Spain ended goalless, Malaga were minutes away from a place in the Champions League semi-finals when substitute Eliseu put them 2-1 up, also from an offside position.

But Marco Reus and then Felipe Santana struck for the German side in added time to send them through.

Malaga striker Roque Santa Cruz, who is on loan from Manchester City, said: "We're still trying to come to terms with what happened.

"We were four minutes away from the semis. There is huge disappointment in the dressing room. We had the tie in our hands."