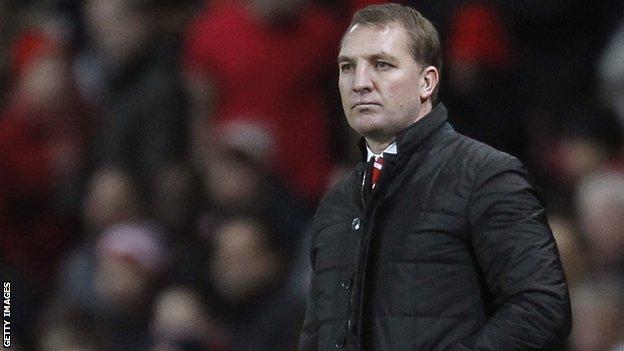 Liverpool manager Brendan Rodgers says he is "unhindered" by Rafael Benitez's insistence that he will return to manage the Reds in the future.

Chelsea interim boss Benitez, who was Reds manager between 2004 and 2010, told a Spanish newspaper he will "almost certainly" return to Anfield.

But Rodgers said: "It doesn't affect me in my work or my job.

"It is understandable any manager wanting to manage the club because it is truly a world-class football club."

Benitez left the Merseyside club by mutual consent after a six-year spell in which they won the 2005 Champions League and 2006 FA Cup.

The Reds finished seventh in the Spaniard's final season - their worst Premier League finish in 11 years - and were also eliminated at the Champions League group stage.

After leaving Italian side Inter Milan in December 2010, Benitez was without a management job until Chelsea appointed him as Roberto Di Matteo's temporary successor in November.

Liverpool are currently seventh in the Premier League in the Northern Irishman's first season, nine points adrift of the top four with six games remaining.

"Rafa had a successful time here in the period he was here and I think he will join a list of probably many managers throughout the world who would love to manage a great club - especially having been here before," said Rodgers.

"Obviously that opportunity was there in the summer if the owners wanted to go down that route as Rafa was unemployed and not working.

"[Benitez's comments are] not a hindrance to me. Before I came here I had seen comments about Rafa wanting to be manager and I've seen comments while I've been here.

"My relationship is very strong with the players, we work very closely together on improving our football.

"We are very stable in terms of our board and the manager connection and we have some of the best fans in the world."

The club has not revealed the exact length of the 26-year-old's new deal. He has made 208 first-team appearances since joining from Gremio in 2007.