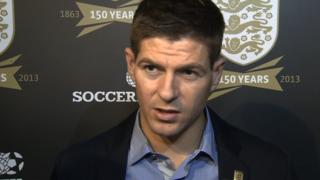 England captain Steven Gerrard says criticism of the national team after their recent draw in Montenegro has been "too harsh".

Roy Hodgson's side drew 1-1 in Podgorica in March despite dominating the first half and sit second in their qualifying group for the 2014 World Cup in Brazil, two points behind Montenegro.

Gerrard has been "surprised by the reaction" to a "really good point" and says that the team are desperate to get to "probably the biggest World Cup there is going to be".