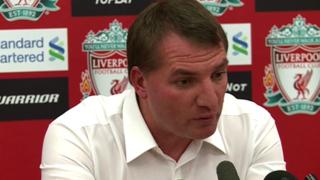 Silence 'is only for Hillsborough'

Liverpool manager Brendan Rodgers says the silence ahead of their game at Reading on Saturday is for the victims of the Hillsborough disaster and not for the former Prime Minister Baroness Thatcher.

Reading chairman Sir John Madejski has called for football to mark the death of Baroness Thatcher with a one-minute silence but the Premier League and Football League will not be asking clubs to organise tributes.

Rodgers says remembering the people who died at Hillsborough is "the only remembrance there should be" and it will give Reading an opportunity "to show their support for the families and the 96 supporters who are no longer here".