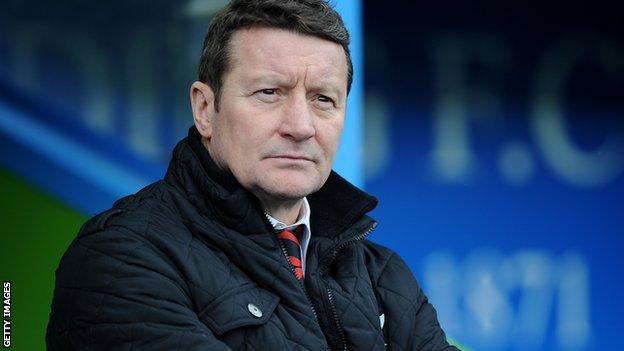 Sheffield United have parted company with manager Danny Wilson with the Blades in fifth place, just six points off automatic promotion in League One.

The club lost 2-0 at home to Crawley on Tuesday and have not scored at Bramall Lane since 16 February.

First-team coach Chris Morgan takes charge until the end of the season.

Wilson took over in May 2011, guiding the Blades to last season's play-off final, where they lost to Huddersfield Town on penalties.

Blades owner Kevin McCabe said: "We must thank Danny and Frank for all their endeavours and hard work over the past two seasons.

"We now have a mini season for this club to achieve success and we will all back Chris in this mission."

After Tuesday's defeat Wilson called on the team to "persevere" with five games of the regular season remaining.

He told BBC Radio Sheffield: "There's a question people might level at us which is understandable.

"We have to persevere. We can't just give up and down tools.

"We've got five games left and if we win them all then we'll be up there."

Wilson was not a universally popular appointment given his spells at Steel City rivals Sheffield Wednesday as both a player and manager.

It was the Owls who denied United automatic promotion last season, pipping them to second place by three points on the final day.

Former Barnsley, Hartlepool and Swindon boss Wilson was forced to cut costs, with Stephen Quinn, Nick Montgomery and Matt Lowton all leaving the club in the following transfer window.

Despite the squad overhaul, the Blades started the season well and went unbeaten in the league until 10 November.

However, they were hit by a season-ending injury to striker Shaun Miller in December before top scorer Nick Blackman was sold to Reading in the January transfer window.

They are six points behind second-placed Bournemouth with two games in hand but have now scored only four goals in eight games.