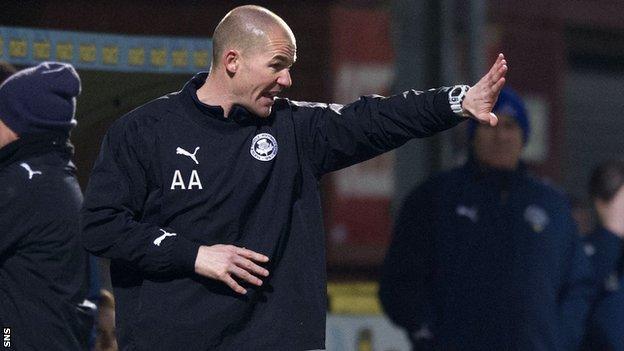 to move five points clear at the top of the First Division.

Victory came three days after Archibald's side lost the Challenge Cup to Queen of the South on penalties.

"The response was fantastic," said Archibald. "I thought every one of them were magnificent."

Thistle are obviously in pole position

Archibald has urged his players not to get complacent as they target promotion to the Scottish Premier League.

The Jags have five fixtures to play, one more than Morton.

"Job's not done," insisted Archibald. "There's still a few games to go and anything can happen.

"Psychologically, to go and get a victory maybe puts a few doubts into Morton.

"It's disappointing that two teams don't go up from this division because to play all year and not even have a play-off is very, very harsh on the other team."

Morton boss Allan Moore says his side will not give up on the title.

"It's a mammoth task, Thistle are obviously in pole position," he said.

"We've got to go and win our next four games and see where it takes us.

"We've got to see how many points we can get on the board. We can't go away and start feeling sorry for ourselves.

"It's a bitter blow but to get to this stage of the season and be in contention is a step forward for the club over the last couple of years."